While 2015 may not have brought the hover-boards sci-fi classic ‘Back to the Future’ promised us, it has certainly brought significant development on the cutting edge of scientific and technological advancement. What follows is an outline of some of the most interesting advancements we have made in the space of these (almost) twelve months, in no particular order.

‘Magic Rocket’ - EM Engine
NASA’s advanced propulsion research group, known as Eagleworks, last year created an engine that seems to violate one of what we believe to be the fundamental laws of physics: the conservation of momentum. And they still aren’t sure how it works.

This year, NASA’s experimental ‘EM Drive’ was successfully tested in a vacuum, providing significant thrust, enough to provide propulsion for a spacecraft.  But as mentioned, scientists don’t know where this propulsion is coming from. Unlike a traditional rocket engine, no propellant is required, only electricity.

While we don’t know how it works, we do know the potential for its use in advancement of spaceflight technology is fairly limitless. It could be used to prevent the ISS and other future space stations falling back to earth, a process which currently requires frequent fuel resupply missions, or could take a spacecraft to Mars in a matter of months! So overall, if the engine proves to be truly working as it appears to be, breaking the current laws of physics, it will be a significant leap forward for spaceflight technology. It will be one step closer to a trip to orbit being as easy as taking the bus.

‘Spaceplane’ - Skylon
Continuing in the theme of propulsion developments is Skylon. Developed by the British company Reaction Engines Limited (REL), Skylon is a concept for a single-stage-to-orbit (meaning it can reach orbit without jettisoning boosters and other hardware, as most other current spacecraft do) spaceplane that utilises the in-development SABRE engine. This engine is the most exciting part of the spaceplane design, as it is a hybrid between a rocket and jet engine. While the plane climbs through the atmosphere, it takes in air like the engines on a commercial jet, and then switches to stored liquid oxygen when in orbit. While not an incredibly complex or ground-breaking concept, the specific implementation of it in this engine is very promising.

The UK and European space agencies are supporting the project, and if all goes as planned, the spacecraft could be making flights to the ISS by 2022.

‘Resistance is Futile’ - Drones
While Unmanned Aerial Vehicles (UAVs, or colloquially and incorrectly, drones) have been in military use since around 2005, it is only really from the end of last year they have begun to enter the civilian market for private ownership. They are still only really high-tech toys, without many practical applications for the everyday hobbyist user, but could have applications in many areas in the future, from mail delivery (already reportedly in research by Amazon) to surveying.

Indeed, the rapid expansion of the drone market has left civil aviation authorities reeling to catch up, and the legality of drones is under scrutiny. The commercial market has also been racing to meet sudden demand, with basement start-ups taking on technology giants like Google to produce consumer-oriented drones. There are already internet guides and open source software for ‘home brewing’ your own drone. Overall, it’s a technology very much still in its infancy, much like 3D printing, and we will see prices drop and applications increase as the years go on. 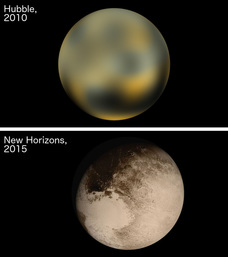 ‘Far out!’ - New Horizons
We are the first generation to see detailed pictures of Pluto, thanks to the development of a mission NASA began in 2006. A reality of the scales involved with space missions is that there is often a huge waiting period between the launch of a spacecraft and reaching its mission objective. In January of this year, the New Horizons probe began its approach vector to Pluto, and performed the closest ever flyby of Pluto, at only 12,500km (a distance a little under the diameter of the Earth) above the surface on the 14th of July. The image compares the best picture previously available, taken by the orbiting Hubble telescope in 2010, with a picture taken by the New Horizons mission. Quite a significant difference, and analysis of the new images has already broadened our understanding of Pluto, especially when combined with other readings taken by the spacecraft.

​
Overall, it’s been a year of exciting and possibly game changing developments in both science and technology - and it’s not quite over yet! I look forward to what 2016 will bring, as we begin to consolidate and utilise some of the developments made during this year. ​