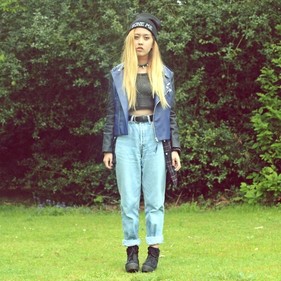 This year is the 40th anniversary of the Punk movement exploding in London and before it spread across Britain and many parts of the world. It really was a movement. It started out as a chance for youths to express their thoughts and feelings through style and music and connect with people with similar tastes. But, like most new music styles, it was also a movement viewed with suspicion by many who viewed it as disruptive and aggressive.

Punk in the 1970s was all about cheap DIY clothing that fitted the poorer lifestyle of many youths at the time and culture that was highly inspired by bands such as the Sex Pistols. The fashion, heightened by famous bands, included buying thrifty outfits and destroying them as much as possible to give a rough edgy appearance to match the metallic stud accessories and bleached hair standing on its ends.

These days however, Punk fashion is less about the meaning behind the clothes and is more about the clothing styles themselves. Instead of buying jeans from a charity shop and cutting or tearing them up you can just go into almost any high street chain store and find an expensive, pre-ripped pair.

If you want to adopt this style but not the meanings then that's totally fine, you just need to do it right! Instead of wasting £30 or so on a pair of tattered jeans or £20 on a tartan skirt, visit your local thrift shop or a market in London like Camden and get your hands on any item that you think has that funky 70s vibe. Once you've got said item, pair it with some fishnet tights (which you can rip yourself for an added effect) or a leather jacket to rough up the look. If you can get your hands on any cool accessories such as a choker, studded bracelet or skull and cross necklace then that’s an added bonus but if not then don’t worry because you can always complete the look with some killer makeup!

Now you don’t have to do the full eyeliner up to your temples or jagged-edged red eyeshadow look but there’s no shame in adapting the original style to suit your own. For example if you like the solid block colour look then maybe a plain black lid of eyeshadow with a slight wing of eyeliner is for you, or if you like combining colours you can tone down the Bowie-style red eyeshadow by having a red lid then mix a warm brown into the crease of your eye. This look is especially great in the autumn as it matches the season’s colours perfectly! If you’re going for a lighter eye shade then go for a darker lip colour and vice versa to give your overall look that edgy Punk feel.