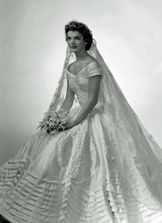 As it’s black history month, I thought I’d do something fitting and did some research into some fashion designers, and that is when I found Ann Lowe.

Ann Lowe was an American fashion designer and the first African-American to become a widely recognised fashion designer. Not many people recognise her name or face but you may recognise one of her most famous pieces: Jacqueline Bouvier Kennedy’s wedding dress (pictured here). From the 1950s and through the 1960s, she had salons where she made custom pieces for high society women. 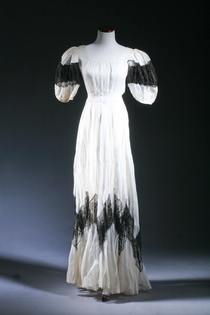 This is one of Lowe’s pieces – a beautiful silk tea gown. She created this for a granddaughter in the Tampa area early on in her career, which is rather impressive! It is made from organdy and has panels of machine-made cotton lace.
She was brought up in Alabama during the 20th century, and soon became the leading designer for the most elite women in Florida in 1916. Soon after, in 1928, she moved to New York City to achieve her dream of being a top fashion designer. For the majority of Lowe’s 50-year career, she was commissioned to create dresses for “white only” events. She did have some African American clients, but most of the dresses she created in her studios were for upper class white women for events that Lowe wouldn’t have been able to attend due to her race. Lowe was very business-minded and a modern audience would expect her, as a black designer, to use her work as a way to publicly fight against racial injustice openly. However, during the period that she worked (1916-1970), this was a very unrealistic expectation. Like many people of colour, Ann Lowe used her work to excel and fight against racial injustice quietly, doing opportunities that normally wouldn’t be done by black fashion designers, and by hiring other people of colour to help with her journey.

An annual festival held in Tampa, Florida, ‘Gasparilla’ was known to be a racist festival is only white people could attend. Lowe was a very popular designer at the time and was the designer for many people who attended this ball, which helped empower her.

After a big order of dresses, she lost an average of $150 per dress, (there were 33 of them!) she entered a period of financial stress. At this time, she owed over $9,000 to a range of people. Lowe suffered a lot of financial issues during this period, along with losing a lot of staff, yet still continued to succeed.

Leading on from this horrible situation, she then had to have her right eye removed for medical reasons, causing her to stop working immediately. However, Lowe explained to the doctor that if she couldn’t design dresses, she’d end her life. Hearing this, the doctor covered the costs of her surgery so she could continue to create wholesale designs and maintain her work with her couture clients.
Through her rollercoaster of her life, she became not only the first, but the most inspirational African-American fashion designer.