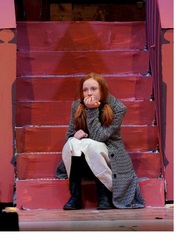 Anticipating the start of Friday’s night performance of Herts and Essex’s very own production of Annie, there was a sense of excitement in the crowd.

Annie is set in the 1930's New York, in the depths of the Depression. Annie (11 years old) is living in the Municipal Orphanage on New York's Lower East Side. Annie decides to escape and try and find her parents. Meanwhile, Grace Farrell, secretary to the millionaire Oliver Warbucks, is searching for an orphan that she might invite back to the Warbucks' household to celebrate Christmas. Annie ends up being the one selected. Despite Warbucks' initial disappointment that Grace has not found a boy, Oliver takes to her and institutes a nationwide search to try and find the little girl's real parents. However, Miss Hannigan’s brother Rooster and girlfriend Lily try to claim they are Annie’s parents for the cash reward.

This year’s production was directed and choreographed by our talented teachers Mrs Allen and musical director Mr Clayton. The production features an amazing cast who sang and danced some well-known songs from the musical including ‘It’s a Hard Knock Life’ and ‘Tomorrow’, supported by a strong backstage and front of house crew. The whole production was very professional, from the beautiful sets designed by art students and a fantastic hair, costume and make-up team. The staging and lighting system was very impressive, but the real stars of the show were the superbly talented cast from Year 7 to Year 13.