There is no Planet B
Ella Piron 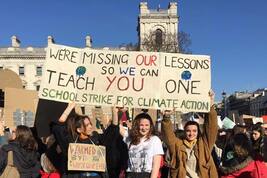 Thousands of young people dropped school and headed to the centre of over 60 towns and cities on Friday the 15th of February last month; thousands more are expected to take to the streets on Friday the 15th of March in a few weeks’ time. What are they demanding? Action.
​
This nationwide protest, inspired by demonstrations held across Europe in the last 6 months, was in response to the lack of political emphasis being put on the climate change crisis. The students, who sacrificed a day of learning and risked detentions, felt angry that so little is being done about the global warming emergency, and decided that something needs to change. The so called ‘strike’ has caused controversy across the country. Were the pupils right to do what they did?

Well, some teachers and politicians are claiming that a pupil strike is not the right approach. They argue that each school day is vitally important for a student’s future, and that by focussing on academic work, the students can achieve their potential and change the world as adults. There are safeguarding issues with students being absent from school, because their location is unknown and their safety cannot be guaranteed.

Others, however, would say that school should not get in the way of something you care about this passionately. They insist that if the protest had not been held during term time, it would not have been so impactful and controversial. It is undeniable that the strike had great success – it starred on the front page of many big newspapers such as the Guardian, and was debated by MPs in Parliament. Whereas, a group of kids spending their holidays commuting to the centre of London and holding up banners doesn’t quite attract as much attention. There’s not much protest there.

It is also supported by 100 academics who, in a letter written to the Guardian, said that the students had ‘every right to be angry’ and were in full support of the strike.

Whichever way you look at it, you cannot argue against the fact that we, the students, will soon be the voters of this country. We are impacted the most by any decision made in parliament about our environment. It’s our future.

Reasons that climate change is a bigger issue than ever:
The fact that students are using their initiative and taking their future into their own hands is a really great thing. I for one have a huge amount of respect for what they are doing, and feel grateful for the attention they’re bringing to a cause that is so important.