Facts not faith. Or else...
Arona Jones: Senior Science Editor 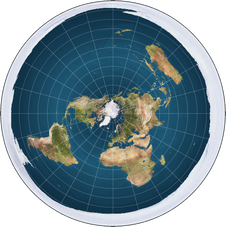 Sometimes, I wonder how people can possibly deny the facts of climate change. Then...I remember that there are still those that legitimately believe, in the face of overwhelming evidence to the contrary, that the Earth is flat.

Yes, that’s right. There are people on this globe (particular choice of words here very much intentional) that genuinely think that the Earth is flat. To give some context as to how ridiculous this truly is, the Ancient Greeks not only knew that the Earth is a sphere, but calculated its radius to within 0.16% of the current satellite measure accuracy. The concept of a flat earth is a pre-scientific one, and yet the belief is held by some to this day.

“Great A'Tuin the turtle comes, swimming slowly through the interstellar gulf…[on which stand] four giant elephants upon whose broad and star-tanned shoulders the disc of the World rests”  - The Colour of Magic, Terry Pratchett

As observable by climate change deniers and ‘flat-earthers’ alike, humans have a strange penchant for clinging tightly to their beliefs, and being able to ignore facts to do so.

Why exactly that this is, is a question for psychology to attempt to answer, and quite outside the scope of what I’m trying to do here. Also momentarily irrelevant are the myriad possibilities that what we call fact could actually be opinion. In other words, I am temporarily dismissing the surprisingly real possibility we live in a simulation or dream (an article for another time, perhaps) for the sake of argument.

That argument is that fact is key. “Faith means not wanting to accept what is true” - Nietzsche

Dependence on blind faith is at best stupidity and ignorance, and at worst flat out hindering to progress and damaging. In the case of flat earth societies, it is the former. Not particularly harmful, just charmingly misguided. However, those that deny the existence of climate change, which by this point is a brute fact, are legitimately dangerous.

As I keep asserting, keep yelling into the void, climate change is real. All the facts tell us so, and yet, nobody listens to the increasingly desperate warnings of scientists. The scientists are the experts here, and yet their opinion is ignored. People think they know better than those in the know. Another oddity of the human mind. The fact is, climate change is a significant threat to the existence of the world as we know it. To deny it is...madness. Threateningly so. The longer we wait to take action, the worse the already catastrophic effects will be. We can’t continue this reckless exploitation for much longer. One way or another, it will come to an end. Either we choose to do better, or we kill the planet. There is no alternative.

I would say I’m prophesying doom and gloom...but the word ‘prophecy’ implies that the facts are not pointing overwhelmingly towards the conclusion I have just laid out above. Better to say ‘predicting’. As I have said, the facts are key.