Footballers or Nurses: Who should earn more?
Rebecca Colton 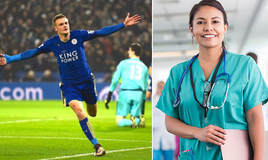 The average premier league footballer earns £2.5 million a year – that’s £48,076.92 a week! A nurse’s average salary starts at £23,000 a year – less than half a premier league footballer earns in 7 days. This means it would take a nurse an entire years salary to not even pay off their full university tuition fees, it would take a footballer under a week with over £20,000 left over. Despite this clearly unfair discrepancy, could it be dangerous to pay a nurse millions?

It’s fair to say that when we are rewarded greatly we work harder; if we could pretend to work as hard and still be rewarded as greatly, a lot of us probably would. Although it is awful to think, could this be the danger with paying nurses too much money? Could our lives be in danger? This is the opinion of many who believe that by paying nurse’s the bare minimum, we are both safe and save money. However, given the 3 – 5 years spent in nursing school, the exams, the 10 hour shifts, the money spent, the toll taken on relationships and social life – the answer is quite simply, no.

The entertainment industry is one of the wealthiest in the world and, although football is a sport, it is publicised as entertainment: it’s live on TV and on social media. Nurses cannot build themselves a reputation like footballers can in order to create entertainment for the public. Saving lives should not be a form of entertainment. Additionally, nurses tend not to be recognized as individuals by their employer, unlike footballers who can express their personalities in order to spark greater interest. This is one of the primary reasons why footballers are paid more than nurses – they are in one of the greatest paying, most global industries in the world. Unlike nursing, which is often considered common and boring.

Could we be without footballers? Maybe some would argue not, but as for the rest of us, we could probably manage without them crowding BBC news, filling our Instagram feeds and being the topic of conversation at almost every ‘lad’s party’. Could we do without nurses? When you break a bone, have the flu or when your life is threatened would you be able to fix and reassure yourself? We need nurses.

A study conducted in 2012 showed that the public believe that Premier League footballers should earn significantly less than they do – the average is £2.5 million and the public thought that £365,000 was an appropriate salary level – still a whopping 12 times more than those surveyed believe a nurse is worth (£29,000). Therefore, it’s not really a surprise that the number of nurses leaving their profession has risen to 51% in the past 4 years.

Nurses are underappreciated and lead to believe they are worth a lot less than they are. Unlike premier league footballers, who are overrated and, due to their industry and publicity they receive, believe they deserve the amount of money they earn. So what do you believe should be greater valued, kicking balls or saving lives?