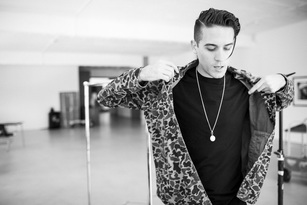 As our society becomes more progressive and young men gradually become increasing self-centred and image obsessed, it comes as no surprise that various celebrities are becoming well renowned for their exemplary sense of style. From Kanye West to Ian Connor, many names from the Hip-Hop community are making large impacts on the fashion world and the trends found in our youth. One of those is the young, and growing, G-Eazy.

Born Gerald Earl Gillum, G-Eazy is an American rapper from the Bay Area of California. He released his second studio album ‘When It’s Dark Out’ late last year, receiving widespread critical acclaim. He was also labelled as one of GQ Magazines Top Ten most stylish men in 2015, being rewarded for his unique spin on 50s and 60s greaser clothing. He’s best known for his trademark black Saint Laurent jacket, usually adorned with a Bathing Ape tee and the latest black pair of trainers.

Black runs through the entirety of this man’s wardrobe; making it hard for anyone to catch a photo of him in anything but the mysterious colour. Surprisingly, this stems from a time in which he had to sell a large quantity of his personal belongings (including a sizable sneaker collection) in order to fund his music career. What remained after the purge was a limited supply of mostly black clothes, spurring his desire to dress exclusively in that colour. His aforementioned greaser style comes from him dropping his stereotypical ‘baggy jeans and fitted hats’ look to better his image in 2009.
​
The effects of G-Eazy’s style seems to have made him stand out in the music scene. Young Gerald doesn’t conform to any pre-existing rapper traits, instead opting for a sleeker, more fashionable look (much alike A$AP Rocky and the other members of the A$AP Mob) that sets him apart from everyone else in the game.