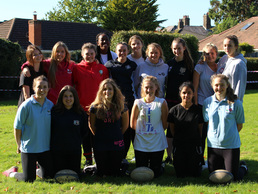 The girls at The Hertfordshire and Essex High School have always demonstrated an aptitude and interest for sports. When the girls of Year 12 found out that rugby and football was only available as an enrichment activity to boys, they approached those in charge and requested for a girls’ rugby team to be set up. As a result of this, exactly one week later, a team was established and the girls began training.

We spoke to two of the members of the female rugby team, Jessica Enemokwu and Frankie Limmer, who pushed for the team to be set up and had some particularly strong views on the matter. "I feel as if excluding girls from the rugby team is unfair, especially in an all-girls school where we should be encouraging girls to take up a whole range of sports," said Jessica.  "I also think it is important for girls to stay involved in sports because often after Year Seven girls begin to lose interest," she continued. Frankie who had similar views told us that she feels rugby is a chance to do something "fun and different".

Historically, rugby is a sport that has encountered issues regarding inequality between male and female teams, such as male rugby players being given professional status while their female equivalents were not.

With the Rugby World Cup in action, rugby is on everybody’s minds. Many people will be looking forward to seeing how the England Women’s team does in the upcoming 2017 World Cup. At Herts and Essex, we will be supporting the girls’ rugby team in their upcoming fixtures and hoping that many more girls throughout the school will be inspired to become involved with the sport.