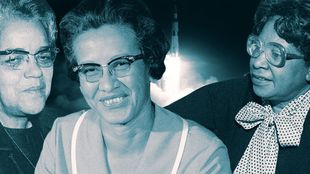 Everyone knows about the space race between America and Russia during the Cold War. However, what many people don’t know is that there were far more people working behind the scenes than history actually acknowledges. NACA (NASA’s predecessor) had large groups of Black Women working in the Langley Memorial Aeronautical Laboratory’s segregated West Area Computing Unit as ‘Computers’- they worked carrying out calculations for NASA. However, in recent years, the stories of some of these women have started to be shared with the rest of the world. In particular, the stories of three women – Katherine Johnson, Mary Jackson, and Dorothy Vaughan – are told in the book Hidden Figures and in the 2016 film of the same name.

The West Area Computing Unit was an all-African American group of female mathematicians who worked as human ‘computers’ at the Langley Research Centre of NACA from 1943 until 1958. The group consisted of hundreds of female mathematicians who began their careers in aeronautical research during World War II. Their responsibilities included processing data, as well as joining other teams at NACA on a temporary basis as they were needed.
­­­
Mary Jackson was an African American mathematician and aerospace engineer at NACA, which later became NASA. She worked at the Langley Research Centre in Hampton, Virginia, for most of her career. Starting out as a ‘computer’ at the segregated West Area Computing division, she took advanced engineering classes and in 1958 she became NASA’s first black female engineer.

After 34 years at NASA, Jackson had earned the most senior engineering title available. After realising that she couldn’t earn further promotions without becoming a supervisor, she accepted a demotion to become a manager of both the Federal Women’s Program, in the NASA Office of Equal Opportunity Programs, and of the Affirmative Action Program. In this role she worked to influence both the hiring and promotion of women in NASA’s engineering, mathematics and science careers.

Dorothy Vaughan was an African American mathematician and human computer who also worked at NACA. In 1949, she became the acting supervisor of the West Area Computers, the first African-American woman to become a supervisor at the centre. She was later officially promoted to this position. During her 28-year career, Vaughan prepared for the introduction of machine computers in the 1960s by teaching herself and her staff the programming language FORTRAN. Later, she headed the programing section of the Analysis and Computing Division at Langley.

­Katherine Johnson is an African American physicist and mathematician who worked at NACA, starting out as a ‘computer’ in a group of women whose main job was to carry out precise mathematical tasks. She was then temporarily assigned to help the all-male flight research team. Her knowledge helped her make allies of her male bosses and colleagues to the extent that they never sent her back to the computing group. When NASA used electronic computers for the first time to calculate John Glenn’s orbit around Earth, Glenn had asked Johnson specifically to verify the computer's numbers and refused to fly unless Johnson verified the calculations. Author of Hidden Figures, Margot Lee Shetterly, stated: “So the astronaut who became a hero, looked to this black woman in the still-segregated South at the time as one of the key parts of making sure his mission would be a success." She added that, in a time where computing was "women's work" and engineering was left to men, "it really does have to do with us over the course of time sort of not valuing that work that was done by women, however necessary, as much as we might. And it has taken history to get a perspective on that.”

During her decades-long career at NASA, she has also calculated the trajectories, launch windows, and emergency back-up return paths for many flights from Project Mercury including the early mission of Alan Shepard and the 1969 Apollo 11 flight to the Moon.

In 2015, Katherine Johnson received the Presidential Medal of Freedom.

“Every time we have a chance to get ahead they move the finish line. Every time.” ~ Mary Jackson