The History Behind Easter
Ella Barnes 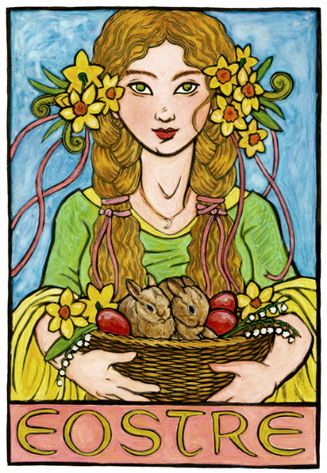 Easter is a time associated with chocolate, bunnies and for some, resurrection. Yet what is the actual history surrounding these traditions and why are they so ingrained within our culture that Easter eggs alone make up over fifteen percent of Britain's annual spending on chocolate? Below, I investigate the Pagan traditions surrounding Easter and their links to the day as we celebrate it in the 21st century.

Easter is a Christian holiday that celebrates the resurrection of Jesus Christ. Therefore, many who are Christian associate Easter with the general symbolic story of the death of the holy figure on a cross. However, death and subsequent ‘rebirth’ is not an uncommon story in the ancient world and therefore not exclusively Christian. There are actually numerous seemingly parallel tales of resurrected saviours throughout mythology dating as far back as the Roman Pagan traditions.

For example, in ancient pagan tradition the Sumerian goddess Inanna, or Ishtar, was hung naked on a stake, and was subsequently resurrected and ascended from the underworld. Yet one of the oldest resurrection myths is the Egyptian god Horus who was born on 25 December and had a damaged eye that became a symbol of life and rebirth, many centuries before the birth of Jesus. These stories therefore, perhaps influenced the building of the myth surrounding Jesus' life in order to make Christianity more acceptable to Pagans.  Yet when researching deeper, modern-day Christians generally regard the Inanna and Horus legends as being Pagan myths of little value, with no connection to Jesus. They see Jesus' death and resurrection as being true, and unrelated to these other earlier figures. It cannot be ignored how prominent the theme of rebirth and resurrection of important figures are within varying religions, and could cause many of us to question whether Jesus was the only saint resurrected or if there was indeed many others.

And traditions surrounding new life and fertility can even be traced back to the source of the term “Easter”. The name comes from the Saxon fertility goddess Eostre (sometimes spelled Eastre or Ostara), with the legend stating that Eostre owned an egg-laying rabbit or hare that embodied fertility and life. Indeed, the pagan holidays of the goddess celebrated fertility and new life in their truest and purest form: the egg symbolising perfection and wholeness in its natural state and the rabbit being a symbol of fertility. For many cultures, the beginning of the spring season was a symbol of rebirth and fertility due to multiple species of animal giving birth (although in more recent years we tend to associate Easter with lambs and chicks) and trees and flowers growing.

It can also therefore be true that more contemporary traditions such as the Easter Bunny and the Easter egg can be traced back to the Goddess Eostre. With her companion being a rabbit that laid eggs and the animal’s rather prolific nature (the idiom ‘breed like rabbits’), they have long been associated with fertility; it is most likely that because of Eostre’s great influence over masses of people that the exchange of eggs became an ancient custom that is now found universally within many cultures.