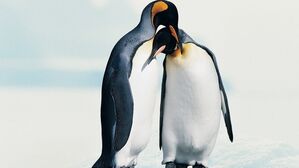 Just in time for this year’s Valentine’s day, an article on how penguins express their love may just warm your heart. Penguins are a type of bird with a family of up to 17 to 19 species. They are most commonly found in the Southern Hemisphere. Though they are classified as birds they cannot fly, they have flippers instead of wings making them pro swimmers - with some being able to reach speeds of 15miles per hour! Now onto the romantic bit…penguins are monogamous. Monogamy can be described as only having one mate at a time, kind of like the idea of being married, this is very rare in most animal groups but common among birds. From gifting their partners pebbles to not eating for over 2 months, penguins are all about making romantic gestures for love.

So how do penguins find a mate?
Courtship happens during the breeding season, it is different among the species of penguin however it all starts with visual and auditory displays, there are 3 distinct types of displays:
- Ecstatic (AKA trumpeting, head swinging or advertisement): This display is said to
indicate the ownership of a nest site, allure females and let other male penguins know to back off.
www.youtube.com/watch?v=sCNW65l45No
- Mutual ecstatic: once the penguin finds a mate, the mutual ecstatic stage happens where the penguins conduct it together. This reinforces a strong bond, helps to synchronize nesting behaviour and announces a nesting site. Like the single ecstatic, the penguin stretches its neck high and makes a braying sound.
-www.youtube.com/watch?v=0gR29sMBWtA
- Bowing: One of cutest ways penguins show love, bowing helps to prevent aggression between couples but also strengthen the love.
https://www.youtube.com/watch?v=ZOp9W05slZo

​Penguin love language:
One of the most adorable ways penguins express their love is by giving pebbles to each other. Just like how we propose with rings, penguins propose with pebbles! Though this isn’t a scientifically proven fact, it is said that during courtship the male penguin looks for the perfect pebble for his mate to give as a gift. If she likes the pebble she will put it in the nest and the couple will continue to build their nest in preparation for an egg.

Penguins are similar to us in the fact that they yearn to be parents and share the care for their children. Once the mother has laid an egg she passes it to the father who incubates the egg. The mother sets off to hunt for food whilst the father puts the egg onto his feet and covers it with a skinfold. The incubation period can last up to 75 days and the father cannot eat during this time in order to keep the egg warm (he loses half of his body weight). Once the female returns the couple call out to each other and the female manages to relocate her partner among thousands of other penguins in the colony, so true love really does exist among penguins!
​