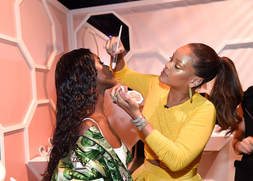 It is nothing short of an understatement to say that Rihanna is a feminist icon for our generation. She has been outspoken on the topics of body image, race, and gender equality.  Not only is she an incredibly successful singer, but over the course of her career she has had 14 songs at number 1 in Billboard’s Hot 100, and in recent years she has become a powerhouse brand and businesswoman.  Since 2011, she has released 4 fragrances; in 2015, she became a co-owner for the music streaming company Tidal; and in 2014, she became the co-director of Puma, releasing a shoe line and two clothing lines.

However, her most recent endeavour, Fenty x Beauty could truly be her legacy. It was released this summer and so far is available in 150 countries. Reviews to date have praised the quality of the products again and again but this is not the true reason this makeup brand is so important today.

Rihanna has said of the makeup brand, "Fenty Beauty was created for everyone: For women of all shades, personalities, attitudes, cultures, and races. I wanted everyone to feel included. That's the real reason I made this line." And this clearly is true.  There are 40 shades of her standout piece, the PRO FILT'R Soft Matte Longwear Foundation.  Her makeup is so inclusive it caters to women of all – and actually ‘all,’ this time – skin tones.

With this makeup brand, Rihanna has made a huge political statement about black women in the beauty industry and the treatment they often receive. Many people are viewing this is as the first all-inclusive makeup brand and celebrating the diversity it encourages. After years of a large part of our population demanding to be represented, Rhianna has answered their prayers; and at  what better time during Black History Month when the culture is being celebrated.