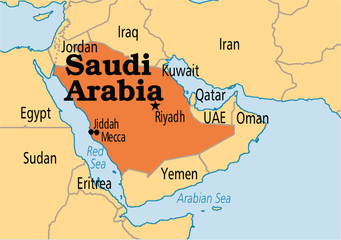 Just three words used to describe Saudi Arabia by the Western media; yet, they continue to be an ally to the US and UK. This is a fact I found utterly perplexing until I discovered that Saudi Arabia is one of the largest net exporters of oil in the world. Without oil, the world would come to a standstill and this is why we, and other Western countries, cannot afford to cut ties with the infamous monarchical state.

The Saudi government, according to The Economist, is the fifth most authoritarian in the world and Freedom House rates it as the world’s least free country. They follow a fascist ideology which limits the rights of women, prohibits homosexuality and forbids the consumption of alcohol. Additionally, in my opinion, the most unfathomable element of Saudi Arabian law is that the death penalty by beheading, crucifixion and stoning is still in place today.

It seems entirely irrational that such punishments are still enforced in some parts of the world, especially in a country that we call an ally.

In a recent interview with Channel 4 News, David Cameron explained that he “completely disagreed with them [the Saudi Arabian government] about their punishment routines, about the death penalty and all the human rights issues.” Similarly, Jeremy Corbyn condemned the Saudi Arabian government’s abuse of human rights, especially with regards to the planned execution of the Shia activist, Ali Mohammed al-Nimr, who was sentenced, at the age of 17, to beheading followed by crucifixion for protesting in favour of democracy.

However, this year Saudi Arabia has been taking small steps towards becoming a slightly less abhorrent country by allowing women to stand for election and vote in their recently established parliament. Nonetheless, the rights of women voting and standing as candidates are still significantly less developed than here in the UK or the rest of the Western world. Women in Saudi Arabia are forbidden to drive and are deemed, under Sharia law, to be the property of their husbands.

This year, the EU passed a resolution with an overwhelming majority urging Saudi King Salman to offer clemency to Ali Mohammed al-Nimr. In September, the EU also condemned the Saudi Arabian appointment to the UN Human Rights Council. Yet, despite this, little seems to have affected the atrocities that continue to occur there.

In addition, there was a debate in Westminster Hall in July attended by a selection of MPs into human rights violations in Saudi Arabia. However, yet again it made little to no impact on our country’s alliance with King Salman.

The solution to this ongoing issue is not definitive. If the UK were to break its alliance with Saudi Arabia, it would not guarantee a significant change in human rights laws and would be unbeneficial to the UK economy.  Condemnation also seems to have a minimal impact on the government.

Therefore, I pose the question, what do students here at Herts and Essex think we should do to get our government to prevent further human rights violations in Saudi Arabia?