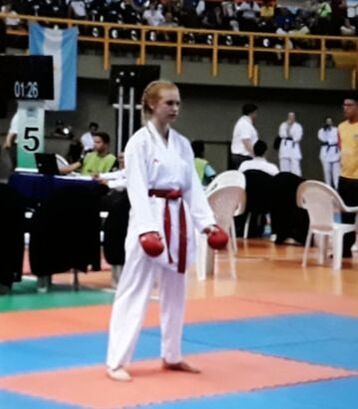 ​You may (or may not) be aware of some teachers and pupils in our school who have used their: determination, grit and motivation in order to be successful in their field. By informing you of these people, their successes and their love for their sports you may be inspired to follow in their footsteps and enjoy a sport as much as they do. By learning of the benefits of sport and finding inspirational people to whom we can aspire to live up to we are more likely to fall into a pattern of doing sport more often. Each time the Network is released there will be a different H and E sporting inspiration to learn about so

this edition’s inspiration will be:

Ruby Wood (12J)
Her sporting achievements= She started in 2014 and started training every Saturday at Seishan Karate where she realised that this was the ‘thing’ she was passionate about. She started competing in 2015 with her first gold won at only aged 9! She attended her first national championships in April 2016 and came back with 2 bronzes. Soon after, she attended her first England national squad training session. Ruby has since been to Kilkenny, Ireland, where she won 2 silvers and a gold, attended 3 world championships winning 9 medals across 4 events and passed her black belt after 6.5 years of training. She was also able to raise £1200 in order that Karate England could go to the IKU world championships-where she won 3 golds and a silver. This by her own admission was her best achievement to date.

So why karate and why is she so passionate and motivated = She enjoys karate because there is always something new to learn or perfect. She says ‘Even now as a black belt I am always learning new things and perfecting my technique’. It also gives her confidence, in knowing that if a situation was to happen, that she would be able to defend herself if needs be. She says ‘The experience of going to competitions and the buzz of participating and being on the mats is like nothing else I have ever experienced’.

At The Network we’re proud to call Ruby of our own and wish her well in her future pursuits. Thanks for sharing your story Ruby.