That Tesco Ad: A Step Too Far?
Kitty Barnes 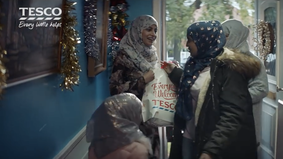 Christmas adverts are just the beginning of our excitement for Christmas, especially highly anticipated ads from John Lewis, Marks & Spencer and others. However, Tesco’s advert, released a few weeks ago, has caught some people’s attention – and not in a good way.

The short advert features many families bonding by sharing their festivity, mostly through the big Christmas dinner – which always guarantees a family coming together at such a loving time. In spite of this, many viewers were caught off-guard when they saw that one of these families was Muslim; the clip also features a Sikh family and a gay couple. Many angry individuals have taken to twitter to point it out, while some have even threatened to boycott Tesco. Most were frustrated as they found it hard to believe that people of religions other than Christianity also celebrate during Christmas-time. The way in which Tesco responded to this backlash was quite fair: they stated that their campaign celebrates the many ways in which we come together at Christmas – “everyone’s welcome.”

England is usually labelled as a Christian country, yet why does this mean that we should exclude other religions because it doesn’t meet our country’s preferences? Why can’t one family enjoy and celebrate the different faith of another family? In my opinion, I find it quite shocking that people are so perplexed over something so harmless. If anything, Christmas is about giving and sharing; being charitable and thoughtful - we should be uniting and consolidating with each other despite our differences. In fact, there are many Muslims that celebrate Christmas which is perfectly acceptable – not all religions are polar-opposites of each other.

Sometimes we can be ignorant and oblivious to the way that other people live their lives; but, nonetheless, this should make us more ambitious to cultivate our knowledge on someone else’s ways. I feel that we should be embracing each others’ contrasting lifestyles, not bashing each other. I feel that we live in a society which is flawed in a way that our awareness of each others’ beliefs are hindered by our own views.

Regardless of the negative backlash from the advert, I think that the sincere element that should be taken away from Tesco’s commercial is how pleasingly diverse and how welcoming the supermarket is to any customer. Just because a Christian holiday is being loosely advertised, it doesn’t mean that Tesco have refined or filtered their target audience – everyone’s welcome. I think that diversity will always be a fundamental aspect to achieving a healthy society. Different religions, cultures, beliefs, ways should not restrict us from assembling together and becoming a wholesome and vigorous community.