The End: Chapter One 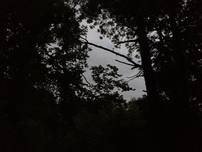 The American Dream is no more than a mirage.

‘’The American Dream, the idea of the happy ending, is an avoidance of responsibility and commitment.’’ - Jill Robinson. I always did like that quote.

So far, I have been here for three hours and thirty-four minutes, all spent in the unpleasant atmosphere of this stifling car. In this time, I have seen thirteen men, twenty four women and fourteen children; five boys and nine girls, all returning from the, surprisingly raucous, state fair. It is precisely 1:50 in the morning of August the seventeenth. The temperature is almost unbearable and the town’s atmosphere even more so. It is a processed town… purpose built for dull, suburban people who are too narrow minded to realise what is coming… what has just arrived. Too narrow minded to realise just how meaningless their lives are and so do nothing to excite themselves other than lazing in front of a television set, drinking and eating and watching their terrible ‘American-Cinema’.

06:34. The morning of the same day; the dull glow of the clock is the only thing keeping me awake, as well as the slight ache from the cylinder. I have yet to find a reason to stay here, and yet, still I linger. The cool steel cylinder digs ever so slightly into my left hip. Before I arrived here, I was in Houston, Salt Lake City, West Virginia, and North Dakota, and, of course, Washington, the political capital of the world. I felt only true amazement in North Dakota; the sprawling, heaving plains full of wild animals and utter nothingness. I almost didn’t want to leave there, but of course, I’m sure you realise, I did.

I dismantled the car’s radio in Washington, just after I left. It wouldn’t stop playing fragments of a song from very, very long ago. As I drove, the dangling remnants of it knocked against the dashboard. Rather perturbing, actually.

The digital dashboard clock tells me it is now 09:12. I can feel the once cool steel cylinder still pressed against my left hip, warming as the day does. There is apparently a local celebrity returning; a man named Steven Sane. He made his millions on the trade of hydro-electric-power. The lake here is what he capitalized on. He built a dam. He created electricity. It was Pacific Gas & Electric he sold it to. Then he went on to even more meaningless, Western ideals; he created a charity, built a school, and developed a new solar panel based engine for cars. An all-round ‘nice guy’, as the Americans would say.

I have found my reason to stay after all.

The clock tells me it is 14:54 in the afternoon of the same day, and I have just heard the song again. The damn song I have heard in almost every other part of America; Houston, Salt Lake City, Washington, all but West Virginia and North Dakota. Clearly, the radio wasn’t the source.  I can’t name it. I can’t quite place where I hear it. I just do. It’s always little fragments too, ‘…my only friend’, ‘the blue bus, is calling us…’, ‘father? Yes, son? I want to kill you…’ At first, I did think it was the ‘faulty’ radio. I realise now it was not, and is in fact something else.
I can’t recall what happens after I hear it either; I seem to just go blank for a period. Then I get the sudden urge to just leave, turn my back on the city, the state, wherever I may be. Flee.

The suitcase in the back seat is dirty and heavy. I can’t remember what I packed that weighs so much. The shoes I wear, I don’t remember buying either. My clothes are fairly plain, black jeans, or ‘pants’ as the Americans say. A dark cloth jacket, a faded shirt with ‘The Doors’ on, I may have liked them at some point. Time has seemed to blur lately. I find myself overcome with fatigue. I haven’t slept in fifty four hours. Time is important to me you see, and I’m running very low on it. I feel an uncomfortable urge to meet this local celebrity (Sane), and show him what’s in my suitcase. It is very hard to explain this urge.

THERE IT IS. The song, again, longer this time, louder; ‘My only friend, the end …  of our elaborate plans, the end … of everything that stands, the end … no safety or surprise, the end …  I'll never look into your eyes...again’ It is different this time, I haven’t gone blank. I can remember. I don’t want to leave or run. I want to stay.
​
The car door locks shoot up. The door squeaks open. A wave of ever so slightly cooler air hits me. The Smith & Wesson Model 3 .44 still rests against my hip. I hear shouting. I hear laughing. I hear his car. Sane is here.