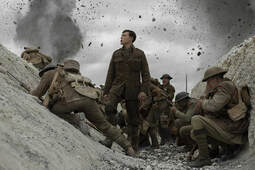 ​
1917 is a technical masterpiece disguised as a war film. So much of the film is near-perfect, from cinematography to moving performances.

So, let’s address the elephant in the room. 1917’s biggest draw was the idea that it is filmed and edited in such a beautiful way so that it seems to be shot in entirely one take –similar to Hitchcock’s Rope. The cinematography itself is gorgeous, the skill required us unimaginable. There is a scene where a character runs through a field whilst chaos unfolds around him and it may well be one of my favourite cinematic set-pieces ever. However, with this technical aspect is also the film’s most frustrating part. Often I found myself distracted by the camera – whether it be through trying to spot cuts or simply the magic of the scene(s). It gives the film a realistic, real-time feel although this does feel odd at points seeing as every other war film consists of fast cuts to break up the action into smaller pieces. Despite this, the intensity is never lost during the entire film and it really is a masterpiece in film making.

The performances are top quality too. George MacKay and Dean-Charles Chapman give amazing performances for such young actors and the effort required is insane. The supporting cast all have very minor roles but are mostly well-known British actors. These include Benedict Cumberbatch, Andrew Scott, Colin Firth (what British film doesn’t?) and Mark Strong. Chapman’s Game Of Thrones co-star Richard Madden included too. Every time a famous face is seen it feels like a milestone for the characters, a short space of time that allows them to breathe. Each actor deserves acknowledgement because this is real acting. I’d also love to point out the ridiculous amount of extras required and the authenticity that they bring to the film is unbelievable. Building on that – the costume design is gritty and historically accurate, making the soldiers feel like soldiers.

Sam Mendes. That is a name that won’t be forgotten soon. He takes helm as director and writer. This man’s commitment is applaudable. His skills show clearer than anything in this film, as evident by the 10 Oscars it was nominated for. Everything form sound design to directing, and cinematography to costuming is immensely well-done.
​
The film is emotional, raw, and so captivating. It may not be my favourite war film of all time but it’s definitely not one to be forgotten soon, bringing light back onto World War One. It certainly requires multiple watches to fully appreciate, but there’s nothing wrong with that.

​Have you seen 1917? What did you think of it? Does it deserve the hype and nominations? ​Share your thoughts!