Is it always wrong to have animals in captivity?
Ella Barnes 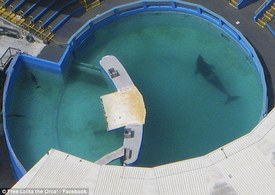 Animals that are held by humans and prevented from escaping are stated as being in captivity. In this article I will explore both sides of the arguments as to for or against having animals in captivity, highlighting what I believe to be key elements from both sides.

From the welfare point of view, it is wrong to keep an animal in captivity if the animal has a less pleasant life than it would have outside the captivity. Yet who’s to say that animals do indeed have less pleasant lives in captivity? In captivity animals are fed well and regularly, receive top quality veterinary help and the risk of dying early is all but removed. Does this sound like an unpleasant life to you? I’m not saying that a ‘longer’ life is necessarily the best, yet surely not being eaten alive or having the irritation and pain of parasites, injuries and illnesses combined with a varied and high-quality diet in a zoo or wildlife park gives animals the quality of life that is as high as or perhaps higher than in the wild.

Furthermore, a species protected in captivity provides a somewhat stable population against extinction in the wild. In captivity they are relatively safe and can be bred up to provide foundation populations. A good number of species only exist in captivity and still more only exist in the wild because they have been reintroduced from zoos, or the wild populations have been boosted by captive bred animals. Quite simply, without the efforts by zoos and similar facilities there would be fewer species alive today; and ecosystems and the world as a whole would be poorer for it.
However, that is not to say that captivity is necessarily for the best. Even with the best intentions and conditions, a zoo cannot provide the perfect environment for every type of animal.

For example, it is extremely difficult for zoos to recreate the natural environment that, say, a dolphin or a whale is used to living in. This is because in the course of a day a whale can swim anywhere up to 160 kilometres day, yet in most captivity whales will be trapped in enclosures a fraction of the size of their usual environment. The average life span of a whale in the wild is around 50-60 years for females and 30 for males, yet in captivity this is all but halved to around 20 years. So are life spans really increasing in captivity? Whales also travel in pods of up to 15 animals at any given time which consist of complex social structures that only elephants and higher primates, such as humans, live in comparably. Their hunting techniques and vocal behaviours are often specific to a particular pod and passed across generations, but captive whales' social groups are foreign to those found in the wild, causing major distress to the animals forced to interact with whales that themselves don’t even communicate similarly. From 1976 to 1997, 55 whales were taken from the wild in Iceland, 19 from Japan, and three from Argentina. That’s 77 whales (not including animals that died during capture). Tearing animals with such complex emotional structures away from their families when they’re only infants to be put into concrete prisons and made to perform tricks for human entertainment is wrong and cruel – so why does it continue?

Furthermore, while all conservation efforts must be admired, for many it may seem futile. For example, in the last century there have been 167 attempts to reintroduce a certain species, of which only 16 have been successful. While this figure is certainly better than nothing, many animal rights activists believe the success rate is not worth the suffering endured by the animals that are alive and living in captivity. Many activists even go as far as stating that zoos are no longer a benefit to people, after a study showed the average time an individual stood at each animal display was less than one minute.

To conclude, it’s evident that whilst some of us believe animals in cages may cause us to respond in anger, some forms of captivity may not be as bad as we think. That’s not to say that all or even most captivity is good, only that, perhaps, we must move away from the set ideology that “All captivity is bad” or that all animals being free in the wild is necessarily for the best. Indeed, forcing animals to perform for the entertainment of others is a form of cruelty. So, is it time for facilities such as zoos to retire the animals and for ‘outdated’ opinions to move forwards into a much more ethical, 21st century view? You decide.