Attitudes Towards People of Colour in Ancient Greece 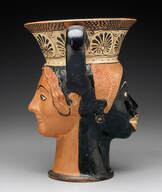 ​‘Most beautiful of all peoples’ is how Herodotus, the father of history, describes the Ethiopians in Book 3 of his Histories. Yet is this truly be reflected when learning about the ancients?
​
There is a simple proposition: that the ancient Greeks had no concept of racial superiority based on the colour of a person’s skin and the relationship between ancient Greeks and people of colour was one of curiosity and admiration.
One way this attitude can be seen in within free-standing sculptures – which were most heavily influenced by the Egyptians. When comparing the two, it is obvious. Emerging in the ‘Archaic’ period of Greek art, around 750BC, we can see that both Greek and Egyptian statues are free-standing, front-facing and solid, with an almost distant smile. In addition, the pose is almost identical: one foot is placed forward, and the fists are clenched. This could be an example of the Greeks essentially copying Egyptian art, as major influences can definitely be seen. The important thing for us is that the white Greeks are being influenced by the black (according to Herodotus) Egyptians. Therefore, it could be argued that basic Greek identity was reliant upon influence from the Egyptians, and therefore the cultures of both black and white people combine positively, with the Greeks admiring their art.

Ancient Greek attitudes towards black people can be seen through many famous figures. For a direct opinion we can return to Herodotus, who suggests that black people, like Egyptians and Ethiopians, were more civilised than some people with white skin, such as the Scythians or the Celts. Another attitude we can find in early Greek history is through literature, as it is stated that Odysseus honoured his African herald, Eurybates, above his other comrades. He is also shown as a hero, depicted on a shield in a 5th century vase painting. The playwright Menander describes race as being useless when judging a person: “the man whose natural bent is good, though his mother is Ethiopian, is nobly born.” His meaning here, is that it is character, not race that determines a person’s worth. Similarly, Athenian orator Isocrates, in around 380BC, famously suggested that the term “Greek” not so much connoted a race, but rather a state of mind. Therefore, there are many forms of evidence to suggest that the common belief was that race was not important to the ancient Greeks, and this is shared among Greeks across hundreds of years.

However, this attitude is not shown when looking at the Greeks’ private lives. Symposia, in short, were private gatherings where men would drink, eat and sing together. Here, two drinking cups can be seen which were not unusual. Head-shaped drinking cups were very common, and the shapes of these heads were either of that of black people, or women. These, sadly, were used to represent the groups that the Greek men contributing to Symposia felt were socially inferior. Along with this, occasional scenes on Athenian vases show Africans as slaves, and this representation combines servant and serving vessel. This depiction of black people in the Greek world is a far cry from the positive descriptions we saw before.
​
Going back to Herodotus’ suggestion that black people were the ‘most beautiful of all peoples’, this was not always the case in antiquity. White supremacy, to a degree, did exist in antiquity, but there was also a partial admiration.