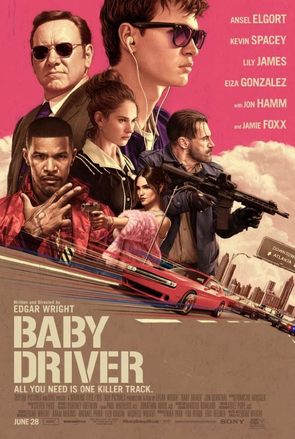 Edgar Wright's Baby Driver, starring Ansel Elgort (Baby), Lily James (Debora), and Kevin Spacey (Doc) alongside a host of other amazing actors, is an action-packed film that will no doubt keep you on the edge of your seat.

Following Baby’s journey from a getaway driver to upstanding citizen, the audience fall in love with his character as he tries to escape the world of crime that he has fallen into. The key to the unique success of this film stems from the fact that he also listens to music to drown out the “hum-in-the-drum” from his tinnitus due to a childhood accident.
One scene in particular stands out to me, aside from the thrilling car chases and heart-warming love stories; the scene in which Baby goes to get coffee. It may sound simple, but the way in which this scene is constructed is extremely clever.

Firstly, all of the music in the film, as well as in this scene, comes from a source within the movie. This is often Baby’s earphones but can also be a radio. Whilst Baby is on his way to get coffee he is listening to “Harlem Shuffle” by Earl, and the lyrics often appear on the scenery all around him. For example, “shake, shake, shake” is on the wall in graffiti behind him which corresponds to the lyrics in the song.

This is apparent throughout the film, as the music often links to the actions of the characters. For example, in a fight scene all the gun shots are to the beat of the song playing at that time.
In my opinion, Baby Driver is an excellent film that has been carefully and uniquely choreographed to a well thought-out soundtrack. Its this use of sound that makes this an enjoyable film to watch time and time again and will no doubt make make this stand the test of time as a modern film classic.