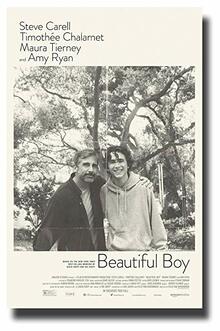 Raw. Candid. 'Beautiful Boy' sublimely orchestrates the moving true story of a father and son and the painful division that is imposed by drug abuse. The story of Nicolas (Timothée Chalamet) and David Sheff (Steve Carell) is both heart-breaking and inspiring.

Nicolas Sheff was a boy: he was an artist, a writer, an athlete; he loved books and poetry, stories and music; his relationship with his father, David, was a relationship full of mutual interests, benevolence and understanding. Nicolas Sheff was a boy who fell down the rabbit hole. He entangled himself in the unpredictable, dangerous, tragically enticing world of drugs and substance abuse, and nothing augments the adversity of Nicolas Sheff more than the truth - and the fundamental message of the film; it is the adversity of millions.

From the very beginning, it is hard to see the comedic, cynical character that we are used to seeing Steve Carell play, and though his humorous roles are popular, it is revitalising to see Carell step out of his typecast. ‘Beautiful Boy’ is largely from the perspective of David Sheff (Carell) and we are shown the experience and effects on the family. We are encouraged to be ourselves as we experience of the film and are encouraged to empathise as the fathers, mothers, sisters, brothers we are - just like David and his family. A close family member losing themselves in the world of drugs, isolating themselves and struggling through addiction alone is a far more moving prospect than trying exclusively to imagine ourselves in the position of the addict.

This film is wholly about the performance and, as a result, both Carell and Chalamet have truly showcased themselves. Carell’s execution of the role and his depiction of a father having to watch his son spiral brings to light the gravity of the effects on everyone that surrounded Nicolas and it is a truly emotional, touching performance that leaves a mark on everyone who witnesses it. The sincerity of the film emerges from his depiction of not only how hard the knowledge of Nicolas’ situation is, but the extreme difficulties and psychological and emotional strain that comes in trying to support recovery, especially with chances of relapse and Nicolas’ frequent isolation from his family.

Timothée Chalamet is proving himself of his capabilities as an actor with every performance. Since proving himself in his breakthrough role as Elio Perlman in ‘Call Me By Your Name’ (2017), Chalamet as Nicolas Sheff in ‘Beautiful Boy’ is no disappointment. His performance stripped away from the frequent glamorisation of drugs in film, exposing the deep reality that hides behind the fun that is so often portrayed to us. His character is so raw and so complex that, despite being narratively aligned with David, our hearts are always with Nicolas and his struggle. We grow anxious when he disappears from scenes, we grieve when we are seen his pain during recovery. Chalamet is quickly emerging as an actor who is making a clear mark in film and he grows stronger with every performance.
​
It is not only a story about the effects of substance abuse, but it is a story of a strong, open relationship between a father and a son – a male relationship that is very rarely portrayed as positively and emotionally in film and television as it is in ‘Beautiful Boy’. The warm colour palette of golden tones and handheld, grainy flashbacks that mimic home video creates the personal tone between Nicolas and David. It is refreshing to see a close father-and-son relationship rather than the generic hostile and closed one and it supports the emerging progressive movement that is trying to encourage men to talk about their emotions and communicate their feelings. The cinematography elevates the performances, as it is almost tragically beautiful, especially in scenes of pain. Generated by the cinematography, there is a gentle, soft atmosphere throughout that supports how sensitive the subject matter that is being portrayed is.