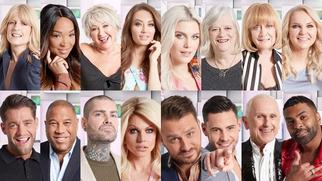 And as it is the month of February (Hers & Essex Pride month), I am going to talk about the gender and LGBTQ+ discussions that have taken place in the house. India Willoughby is a transgender Woman who was very keen to talk to others about her life experiences as a trans woman.

Shane J is very open about his gender and sexuality as well as very informative to the other housemates about the difference between drag and being transgender. In his intro video Shane describes himself as a gender-queer, polyamorous, pansexual, vegan, and often, while transforming into Courtney, he informs the others on his view of gender and how he believes gender is a spectrum from 1-6 in which he places himself at a 4. Shane has also been sharing his wigs with the other housemates and even transformed Andrew into a drag queen. Shane has been backed by a large amount of the viewers and is one of the favourites to win.

The logo for big brother has also been under discussion this year as it features a more feminine eye than past years with eyeliner and mascara, whereas in previous years the logo was more like the shape of an eye rather than a picture of one. This year, gender has been important in the big brother house with competitions between the men and women in order to win the power if nominations for eviction.