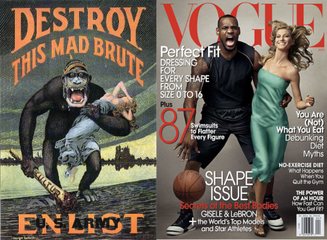 Every year we hear the same things about black history: slavery, the apartheid and of course Martin Luther King. In our predominantly white area, is that all we need to fill the Black History Month quota without really taking the time to delve deeper?

One major problem with the representation of BHM is the annually repetitive content. For most people it goes in one ear and out the other and you’ve forgotten what was said by the time the month is over. This doesn’t bode well because black people can’t just forget the oppression that affects them every day. Racism isn’t history at all; it’s just subtle and discrete, thriving through institutions and micro aggressions. For example whereas in the 50s racism was being called the N word or facing segregated public spaces, now it’s the fact that black people are less likely to get a job because of name discrimination or implicit racial bias. Everyday racism is the fact that if a black woman manages to secure a job she will earn 12p less than the average white woman earns. Racism can be seen in the stats from America where dozens of innocent unarmed black people can be brutally killed by policemen without a single one of them being convicted for their crimes. In fact due to police brutality, in the past few years more black people have been murdered by the police than all of the black people racially targeted and lynched in 1954 in the USA.

Is the media racist too? Are black people only being represented as entertainers or athletes and never recognised for academic or scientific achievement? This reinforces the idea that black people aren’t smart and their only value is placed within entertaining white audiences. Could this be a parallel to when black slaves would be asked to entertain their masters?

Focusing on the intersection between misogyny and racism, black women are arguably only valued for their bodies which are constantly hypersexualised by the media even with young girls. At the same time, black girls are being told their bodies are inadequate. For example, many school dress codes don’t allow natural black hairstyles labelling them “unprofessional” or girls are mocked by others for the curls and shape of their natural hair. Darker skin is dehumanised and made to look ugly in the face of skin bleaching products, media representation and Euro-centric beauty standards. This kind of racism gets internalized firstly by the black girls who then have declines in their confidence but also by everyone else who then begin to perpetuate these detrimental ideologies.

So of course we have to credit the hard work and resilience of the likes of MLK however, we also have to acknowledge that their work isn’t finished. This is what modern racism looks like and it is far from over.