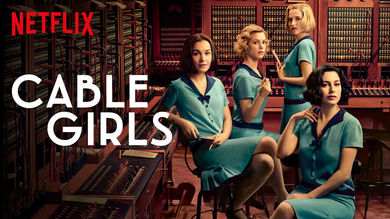 Cable girls is a romantic drama available on Netflix, set in the 1920’s, which focuses on the friendship of four women who work in a telephone company and are ‘The Cable Girls’. Although it is not based on a true story, elements of the drama reflect the society at that time and the hardships these women endure due to the way society treats them. This makes the storyline more inspirational as it shows the women’s determination and courage as they tackle problems together, making their friendship more lovable and special. This makes the show more appealing as you want to see how each woman fights for her own freedom.

The story mainly focuses on Alba, who narrates the story, and has had to change her name and start fresh. The drama features an ongoing storyline of her and her first love as they are reunited in the first episode, which captivates most of the show’s audience throughout the two seasons as it provides an emotional storyline of romance and broken hearts (she has to choose between two people she loves, creating added suspense) –  it’s one of the reasons why it is a must see!

The drama is set in Madrid and is in Spanish, which allows you to learn about the culture and language of Spain. It also makes the show more romantic and makes you want to see the Spanish culture in person. Although it isn’t a modern show, it features modern twists that still make it relevant to modern day and still helps you understand that part of the world. It definitely makes you want to explore more shows like this.

This is definitely one of my favourite TV shows at the moment, as it is a balanced mix of romance, comedy and drama which makes this show flawless and something I would recommend to everyone. Music is featured heavily which makes the show more dramatic and tear-provoking, especially towards the end of each season as the storylines unfold and multiple deaths occur. This makes me love the show even more as the classic set of the show works really well with the modern choice of music, making the drama seem more modern without losing the old-fashioned style.

The key to the success of this show is the way the storyline develops and how easily the audience are able to fall in love with certain characters, especially the four women, which allows becoming invested in the characters and makes the audience more emotional depending on certain plot twists that help form this riveting drama, while allowing it to still be enjoyable. The essence of the storylines are relatable and relevant to many people (especially women) in today’s society as the show features in a more dramatic yet realistic way of how women were treated then, but also shows that times are changing and that women are becoming more respected – the men in the show treat the women as equals, which creates and atmosphere of feel-good and hope for each character to have a happy ending.