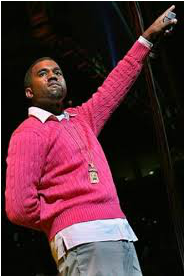 No, is the simple answer to that question - or at least that's what society would like to think. “Pink is a girl’s colour,” is the most likely answer a person will give you in response to this question, although I wasn’t aware that one half of the population had ownership over this particular colour. Nor was I aware of the fact that a male who decides to wear pink would automatically be deemed a “feminine guy” by society, as I have never believed that fashion directly reflects your personality and identity to that extent. Just because a person wears certain items of clothing, can we really hastily assign certain personality traits to them? If someone wears a flowery top, are they automatically a hippie?

The fact is that men have a tendency to shy away from any diversion to the norm of being anything other than masculine man, thus finding themselves feeling restricted to certain personality traits, hobbies, and behaviours. Role models in the media seem to be represented as popular or unpopular, cool or un-cool - there are essentially no ‘grey-areas’. For example, the ‘joker’ male in a TV show uses his comedic personality to avoid a serious emotions, giving the idea that males with this persona have a consistent attitude that life is just one big laugh, when it is highly unlikely that their even a male deemed to be a ‘joker’ would burst out laughing after finding out their grandmother died. Most representations of males in the media tend to neglect the complexity of their character, and often end up producing unrealistic and artificially formulated characters that males are supposed to identify with.

We need to stop labelling. There is no benefit to it, and in no way does it reflect the person being labelled. Rather, it is a reflection of the person doing the labelling. There are also no benefits to the belief that certain behaviours and actions make a male “masculine” or “feminine”. Whether you choose to wear pink, play football, play chess, act confidently or not, will not make you more or less of a guy. There is no scale that exists to measure a male’s “maleness”, and whatever you choose to do with your life will not jeopardise that. “Stop labelling, start living”(Cara Delevingne).