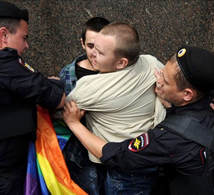 As a human rights organisation, Amnesty International is devoted to assuring safety and wellbeing for all the population. Naturally, the mistreatment of over a hundred men suspected of being gay is a great concern and Amnesty is determined to raise awareness of it.

The Chechen government won't admit that gay men even exist in the country, let alone that they ordered what the police call 'preventive mopping up' of people they deem undesirable. While a United Nations expert says that the violence is at an 'unprecedented level', this is not new to Chechnya. These hate crimes are unlikely to ever be properly investigated and it is essential that we, as a school, are aware of the dangers and do our best to support those who are being persecuted due to supposed 'non-traditional orientation'. All human beings deserve their rights; these men are not being allowed access to theirs.

We urge students and staff at Herts and Essex to sign Amnesty International's petition to stop this unlawful act of hatred. Please sign the petition to stop the abduction of innocent men, deemed criminals because of who they love.

Sign the petition here and read more about Amnesty's cause: https://www.amnesty.org.uk/actions/stop-abducting-and-killing-gay-men-chechnya