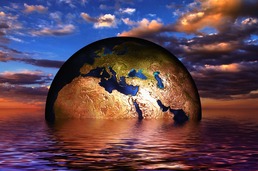 I’ve said it before, but I think it bears repeating. Climate change is the single biggest issue facing our generation. Scientists have been saying that we have to keep global temperature rise under two degrees Celsius to limit the life-changing impacts across the planet. And even then, that will only limit the damage. The fact is, we should have taken action long ago, and every second wasted is more damage caused.

Two degrees doesn’t sound like much, but in terms of global temperature it is huge. It will change the face of the planet, both literally and figuratively. These are optimistic models, too. If we take no action, the future is dark indeed. And yet...it isn’t spoken about. Politicians and the general public alike are systematically ignoring the desperate warnings of scientists.

Speak out about climate change. It is a problem for our entire species, every one of us, but can only be solved through concerted individual action. In my last article on this subject, entitled We’re all doomed! (and you can be too), I made a call to action. Implored you to do at least one thing better for the environment, and pledged to do the same myself. I realise now I’ve been lax myself - although I have made something of an effort to save energy. I’m part of the problem. We all are. We have to do better.

Let me paint a picture of the future we are currently hurtling towards. Wars will be fought over dwindling resources. There will be bitter conflict between the ‘us’ and ‘them’, when in reality there is only ‘us’. Wars will be fought for water, that most basic yet precious of life-giving resources. Ever more extreme weather will strike ever more frequently, tearing into low stockpiles even further. This may sound like some unlikely and dystopian ‘Mad Max’ esque future - it isn’t. The facts, and the experts, tell us that is where we are headed if we do not change our ways.

I’m repeating myself again. Because the reality is, we simply aren’t doing enough. Climate change has to be front and centre of both wide-spanning international politics, and individual daily life. I’m repeating myself again - hoping it will sink in - it is the single most vital and pressing issue of our time. Either we change ourselves, or we change the Earth. It’s a life and death choice: life of a species, an ecosystem, a whole world; or the death of a planet.