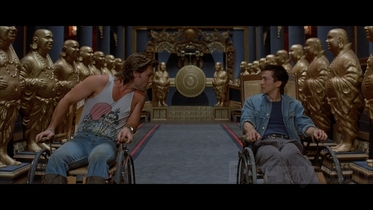 Although a commercial failure at the Box Office and not a complete success with critics at the time of its release in 1987, this crazy kung-fu fantasy has since been reappraised and is now regarded by many film fans as a cult classic.

It was American director John Carpenter’s third outing with actor Kurt Russell, and was easily their most colourful and enjoyable collaboration (the previous two being Escape From New York and The Thing) with Russell again taking the helm as Carpenter’s leading man. The premise of the film revolves around all-American trucker Jack Burton (Russell) who decides to help his Chinese friend, Wang Chi (Dennis Dun) get back his green-eyed fiancée after she’s been kidnapped by a San Francisco street gang. What seems to be a simple plot at first, soon breaks out in the most hilarious and bizarre way. What ensues is a prolonged chase through the vast underbelly of Chinatown with Jack, Wang and Gracie Law (Kim Cattrall), Jack’s love interest, running into a plethora of sorcerers, ghosts, monsters and martial arts masters.

As outlandish as a two thousand year old evil sorcerer crime boss of Chinatown may appear, this along with the rest of the film’s mystic madness, is orchestrated in such a way that it plays as an over-the-top homage to the Hong Kong sword and sorcery genre. Through its Chinese influenced wirework, acrobatics and colourful special effects, it manages to introduce a unique and wonderful style to the mainstream American audience of the 1980s. Although many today consider the special effects to be outdated, it only adds to its effect of comedy and ridiculousness, which its cult following appreciate so much. After all, this isn’t exactly a film to be taken too seriously.

Despite all the flamboyant visual trickery and showiness, what lies at the heart of Big Trouble In Little China, and what gives it its loveable comedic flair, is Russell’s Jack Burton. Probably the most unconventional of heroes and the complete opposite of Russell’s character in Escape From New York (the brooding, badass anti-hero Snake Plissken), Burton is a hard boiled, meathead truck driver of the suitably named ‘Pork Chop Express’ who never seems to have a clue what he is doing. His hilariously dumb but memorable lines and actions only heighten
the comedic aspect whilst also bringing with him a spirit of adventure through his well-meant but often unsuccessful heroics. Here the white American hero/Asian sidekick convention is reversed with Burton slipping up at every hurdle only to think he’s saved the day when really it’s him who is being rescued by Wang and his Chinese fighters and magicians.

With its witty script, hilarious and cartoonish action-packed set pieces, assortment of bright special effects, and a hysterical John Wayne-influenced performance by Kurt Russell, Big Trouble In Little China is an almost perfect cult film and a definite must-buy.