“People stared, at the makeup on his face”
Oliver Wilcox on David Bowie 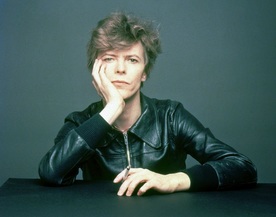 When the name ‘David Bowie’ is heard, most people think of that iconic lightning bolt image, the song Heroes, or the film Labyrinth. Bowie will forever be those things and many, many more. As a true individual, Bowie defied every expectation placed upon him as a pop star, a glam rock star, an actor, a fashion icon and simply as an artist. A true master of image.

The early seventies were when Bowie came to find fame and success with his albums The Man Who Sold the World, Hunky Dory, The Rise and Fall of Ziggy Stardust and the Spiders From Mars and Aladdin Sane. More than enough articles, reviews and dissections of these albums have been written and a simple search online will present these, so I won’t bore you with another.

Bowie, at this time and throughout his career, used sexuality, sexual identity and androgyny to provoke his audience and to create an otherworldly sound to his music and become a true icon. Bowie’s appearance on Top of the Pops in ’72, after recently declaring himself as bi-sexual, performing Star Man displays something a modern audience wouldn’t find particularly offensive or shocking, but in 1972, Bowie’s skin tight jump suit, makeup and simply pointing down the camera and singing the line ‘’Had to phone someone so picked on you-oo-oh’’, caused older generations to reel in distaste and teenagers to feel there was something out there for them. Even the act of draping his arm around Mick Ronson, his guitarist, brought forth a slight homosexual tone at a time when homophobia was rife. Bowie was, and is, something else, and this proved it to everyone.

His brief involvement in the glam scene turned him into an archetypical image of sexual freedom. His revealing stage outfits, sexual lyrics and a notorious reputation of having sex with anyone caused Bowie to become an alternative icon like no one else.

The album cover for The Man Who Sold the World sees Bowie in a dress, a clear image of androgyny and the Young Americans cover sees Bowie looking distinctly feminine. Even in his recent video for Blackstar, an androgynous male with a tail is seen to take the jewel encrusted skull of Major Tom from an old space suit and deliver it to some sort of cult.

Through his elaborate outfits from Kansai Yamamoto, Natasha Korniloff and Alexander McQueen, his daring make up and stage design, his indescribably brilliant music portraying sexuality as something beautiful and something to be accepted by everyone, Bowie turned himself into a true icon and the last true artist.