Donald Trump Impeachment: What happened and what comes next? 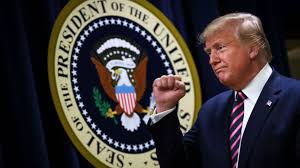 On 18th December 2019, Donald Trump became the third president to be impeached by the House of Representatives (the lower chamber of the US Congress). The next stage is a trial in the Senate (the upper house of Congress), where it is likely that he will be acquitted. But what does this all mean? How does the whole process work? And what could this mean for Trump and his election bid?

What does impeachment mean?
Impeachment means that a holder of public office (not just presidents) is charged with misconduct. It is NOT the same as being removed from office
​
Why was Donald Trump impeached?
Donald Trump was impeached on two counts – abuse of power and obstruction of Congress. He is accused of having withheld military aid to Ukraine in exchange for an investigation into Hunter Biden. Hunter Biden is the son of Joe Biden, one of the frontrunners of the Democrats running to be the candidate to stand against Trump in the 2020 presidential election. He is also accused of not cooperating with the House of Representatives during the hearing into his crimes.
What happened?
Now that Trump has been impeached, his trial took place in the Senate (it began properly on the 22nd January 2020) as the Democrats voted to send the articles of impeachment over to the Senate on the 15th January. The trial was different to the hearings that took place in the House of Representatives and had a different tone. Whilst the House of Representatives is controlled by the Democrats, the Senate is controlled by the Republicans – Donald Trump’s party.
Two-thirds of senators (67 out of 100) needed to vote to remove Trump from office. As the Republicans control the Senate (53-47), this did not happen. Trump was acquitted on both counts – the vote was 52-48 for the first charge(not guilty) and 53-47 for the second charge, which went strictly along party lines.
The other presidents who have been impeached, Andrew Nixon  and Bill Clinton, were not removed from office. Both of them were acquitted by the Senate.
What does this mean for Trump’s 2020 election bid?
The Republicans have united behind the President, with the exception of Mitt Romney, who voted against Trump on the first charge.
Trump will be the first impeached president to run for re-election.
Although it could be argued that the impeachment will harm Trump’s re-election chances, it could also be argued that this will mobilise Republican supporters and galvanise his support base.
Furthermore, Trump has a lot of good things to say in his 2020 election bid such as the fact that economic growth in terms of GDP has generally been strong and the stock market (Dow) has reached record highs; unemployment has also been decreasing under Trump.
As for the Democrat campaign, a series of caucuses and primary elections are currently taking place to determine who the candidate will be. Joe Biden, who was seen as the front-runner has not done very well in the Iowa caucus and New Hampshire primaries, however Pete Buttigieg has done well so far. Other front-runners include Elizabeth Warren and Bernie Sanders. The Democrat candidate will be officially announced at the Democratic National Convention in July.