Donald Trump and the legitimation of racial hatred
Charlie Markham 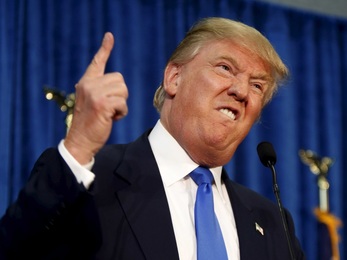 In our fairly liberal and multicultural Western society, people as vociferous as Donald Trump can seem outlandish. But with the legitimation of hate speech on the world stage, people as outspoken and controversial as Trump are becoming a much more common sight.

The sheer amount of racial hatred Trump has spewed, throughout his short time in the spotlight, is phenomenal. He has claimed that he will "build a wall" on the Mexican border to keep immigrants out because they are "bringing drugs. They’re bringing crime. They’re rapists" and even claimed "Laziness is a trait in the blacks". How any serious political figure is able to say the things Trump says and escape public outrage is beyond most rational people.

Arguably, his most offensive suggestions have come more recently; after the Paris Attacks, he demanded a "total and complete shutdown of Muslims entering the United States." He went on to recommend the US implement a database to track Muslims and begin surveillance on mosques – an idea reminiscent of the tracking of Jews in Nazi Germany.

Many would say that racist politicians have no place in our democracy and only further oppress minorities. To be attacked so publicly by a figure who is supposed to 'represent the people' only alienates minorities and contributes to the radicalisation that Trump so fears. By attacking these groups and inciting racial hatred, Trump should expect no less than an attack in return. Despite this, his right to say such obnoxious and demanding things is to some a true testament of how effective our free speech in the West is, and it is better to have free speech abused by those like Trump than to have it controlled by governments.

Trump’s outrageous claims may serve a purpose, however.  By having such a person in the public eye, perhaps the bigots in our society feel more represented and are less vocal about their opinions in everyday life. By having Trump as their political mouth piece, could everyday racism decrease? Possibly. But it may also be making racism tolerable in our society, by being confronted with such emotive and extreme views on a daily basis, we are becoming desensitised to this bigotry and no longer see it as dangerous.

The most important thing about Trump though, whether you agree with his views or not, is that he is not taken seriously. His views are written off as the xenophobic ramblings of a facetious man who is not in touch with what the people actually desire. Hopefully, the people he's attacking find him as comical as the media have.