We're all doomed (and you can be too)!​
Arona Jones 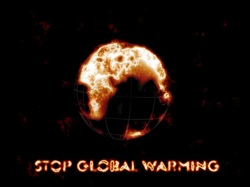 Apologies to the (inspirational) lecturer at the Young Scientist’s Journal, from whom I unashamedly stole this article title - it was just too good not to use! The format and content is also very heavily inspired by his lecture, so many thanks to him.

Last issue, our own Latifa Alkhanjary highlighted that not everyone was wishing for a white Christmas. And fortunately, those sleeping rough got their wish. There was not a hint of snow on Christmas Day, or the rest of the holiday for that matter. Globally, this winter was an unseasonably warm one, following a worrying trend.

The debate on its cause is another matter, but arguably irrelevant. Whether this is a wholly natural phenomenon, a human exacerbation of a natural cycle or something that humans are entirely responsible for, the fact is that our climate is changing. Fast.

Climate change has been measured by scientists for years, and now the first of its far reaching effects are observable to all. Rapid desertification, intense heat waves and forest fires and the loss of polar ice are all occurring for everyone to see. Closer to home, heavy flooding has transformed from a once in a lifetime event to an all too regular occurrence.
At this point, rising global temperatures are inevitable. It’s just a matter of how big the rise is. Scientists agree that to (most likely) prevent catastrophic change and runaway warming effects, where the rising temperatures melt ice that has greenhouse gases locked away in it, further increasing the temperature, we must keep the rise under two degrees Celsius. The current projected rise is a four degree rise by 2100, if emissions continue to rise at their current rate. Note that this is a global mean temperature, and so while a few degrees may seem relatively little, a 0.1 degree rise in this value can be highly significant.

I make no apologies for the no-punches pulled facts I’ve laid out above. The world needs its eyes opened to the realities of climate change, and the fact that our current path leads to possible, or even probable, extinction. However, it isn’t all doom and gloom. We can still change our future. Our track record does hold one positive example - the ozone layer hole - which by now has almost fully healed, mostly thanks to the near global ban on CFC use. The climate summit in Paris during the latter half of 2015 was an important step in the right direction, but we need to ensure we keep taking these steps.

The individual scale is just as important as the global one when it comes to climate change. While it is up to governments and scientists to look for green energy solutions, it is up to us to change our lifestyles and reduce our carbon footprints. If the whole of the world’s population lived the consumerist lifestyle we do, our land needs would be astronomical - certainly multiple times all available land on Earth.

So, I challenge you. Mark your calendar, one year from now. Vow to change your ways, to reduce your footprint as much as possible. And then after that year has passed, you can reflect, and see if you have succeeded. You can each make a difference.

At the conference, we were asked to make a pledge to do better for the environment. And to set a reminder to ourselves one year from then, what progress we had (or hadn’t made). I did. Will you?

At the risk of sounding cliche (and over dramatic), we have to work together to ensure the safety of our future, and the futures of our descendants. There is no alternative but doom.