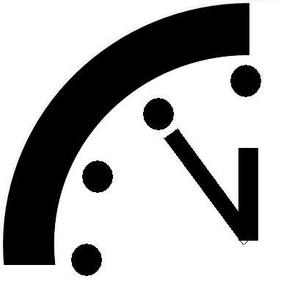 But this isn’t any normal clock. This is the Doomsday Clock. A metaphor. A warning. The closer to midnight the clock is set, the closer humanity is to potentially tearing itself apart. Destroying ourselves with weapons and issues of our own making.

The Clock is set by the Bulletin of Atomic Scientists organisation. Originally dependent on the whims of the Bulletin’s Editor Eugene Rabinowitch, the hands are now governed by a committee of nuclear scientists and experts that meet twice a year to assess how far from — or indeed how close to — our doom we are.

​It was created in 1947, when the United States and Soviet Union nuclear arms race was gathering speed. Atomic warfare was originally the pure focus of the Clock, but the potential catastrophic impact of climate change has been considered in the hand-setting since 2007.

The closest the clock has been is two minutes. And that was in 1953 when thermonuclear weaponry was tested by the USA. Less than six months later, the Soviet Union tested bombs of their own.

And yet, 63 years later, we are at three minutes to midnight. The threat to the human race is almost as strong as it was during the Cold War, that period of history that included the Cuban Missile Crisis. Each participant in that crisis was a hair’s breadth from a nuclear launch, and the end of the world as we know it.

Careful diplomacy from world leaders was the only thing that prevented the Missile Crisis from dissolving into all out mutually assured destruction. Open communication and trust is vital in the control of the dangerous weapons we have built. There is no political agenda in attempting to ensure the survival of society and species. As long as nuclear weapons exist, danger exists.

The reality is we are at constant risk of the destruction of civilisation. The Bulletin is simply a warning, a “doctor making a diagnosis” as it were. It is not speculation. It is judgement and assessment of the current state of our world. The level of danger.

An elegant metaphor for the reality that our survival hangs by a thread. That there’s no time to waste.

Read more about the workings of Doomsday time — its clockwork as it were, here: http://thebulletin.org/doomsday-clockwork8052