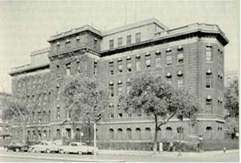 
Dorothy Lavinia Brown was a doctor, born in Philadelphia, Pennsylvania and was placed in an orphanage, after her unmarried mother abandoned her, where she lived until she was twelve.  Her interest in medicine was sparked from a tonsil operation she had as young girl. From that day she was ever curious and was desperate to have an education, one many of us still take for granted today. At the age of fifteen she ran away and was placed as a mother’s helper at Mrs W.F Jarrett's house where she was encouraged to pursue an education and become a doctor. Upon enrolling at The Troy High School in New York, she was introduced to Samuel Wesley and Lola Redmon who eventually became her foster parents
She eventually finished high school while working as a domestic helper, and obtained a scholarship at Bennett College in Greensboro, North Carolina after receiving help from a local Methodist church. She got her Bachelors of Arts degree in 1941, and it was not until 1944 where she enrolled into Meharry Medical college in Nashville and kick started her career in medicine. She graduated in 1948 within the top third of her class. However, she had only started the rocky road to becoming the doctor she had wanted to be since a young girl.

Brown became an intern in Harlem Hospital in New York, however at the time there was an extremely strong opposition to female surgeons and was therefore refused a surgical residency. Even though Brown had countless doors shut, such as this, she didn’t let this stop her. After convincing the chief of surgery, she returned to Harlem Hospital and completed her surgical residency in 1954. Allowing her to become the first African American Female surgeon in Southern US 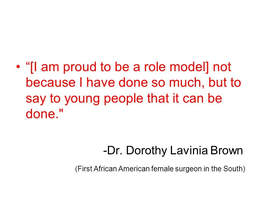 To add to her firsts, she was the first African-American Chief of Surgery in the south and eventually a professor at Meharry Medical College, the same college she went to. In 1966, she yet again achieved a first by becoming the first African American woman to be elected by the Tennessee State legislature for a two-year term. Then in 1968 she attempted to run for the Tennessee senate, eventually losing due to her support of the liberalization of abortion laws.


She did not only devote much of her life to medicine but also adopted an unmarried woman’s child, similar to her own childhood. She later named the child Lola Brown in honour of her own foster mother.

Brown was a pioneering surgeon, who sadly died of congestive heart failure on June 13th 2004.

Dorothy Lavinia Brown was and still is an extremely influential African-American woman, who paved the way for many after her. She led people to believe in themselves no matter their age, gender, race or background: showing that you can come from nothing and grow to be an inspiration for years to come.