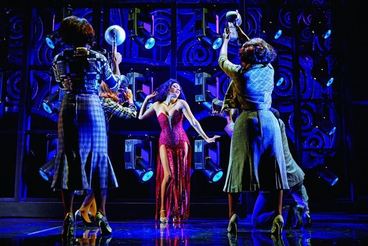 When I heard that Dreamgirls was coming to the West End towards the end of last year, I was thrilled; the film had been a part of my childhood and the soundtrack is something I still listen (rave) to regularly.

35 years after the musical opened on Broadway it was finally coming to London and I knew I had to see it; I booked tickets as soon as I could and finally on Monday the 16th of January I got to see it… Would it live up to my very, very high expectations?

The story is set during the 60s and 70s, a revolutionary time for music, and follows a hopeful girl group, The Dreamettes, from Chicago on their journey to fame and the twists and turns their road takes. The plot is pushed along by sensational songs such as ‘And I Am Telling You’, ‘Listen’ and ‘One Night Only’.

From the moment the curtain went up to the final bows I was amazed, with minimal staging the attention was on the actors and their performances; they did not disappoint. Of course Amber Riley, the lead actress, was highly anticipated by everyone and she blew the audience away; her performance of ‘I Am Changing’ had the entire audience in tears. She was animated, sassy and her vocal chords were to die for.

However, her performance was not the stand out one by far.Liisi LaFontaine who played Deena Jones delivered an emotional performance alongside Joe Aaron Reid who played Curtis Taylor Jr, their duet ‘When I First Saw You’ had their audience on the edge of their seats with the tension in the room. Adam J Bernard playing Jimmy Early brought laughter and light to an otherwise serious and sensitive story.

From the leading lady to the ensemble dancers everyone gave a 100% performance and helped to fully immerse the audience in the story; the dance numbers such as ‘Step Into The Bad Side’ were entertaining and high energy.

The costume design by Gregg Barnes was outstanding; the vibrant sequinned gowns perfectly encapsulated the glamour and elegance of the story whilst the other costumes, such as the pastel purple jumpsuit, took inspiration from the era.

Overall, it was an amazing production and perfectly lived up to my childhood expectation. I would recommend it to anyone, whether you love musicals, are a fan of the soul music genre or simply enjoyed the original film.