The women who don't even realise they've been sexually assaulted 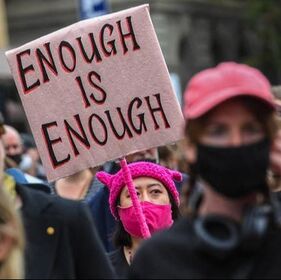 Walking home, by yourself, in the dark is a dreaded experience. It means holding keys between your knuckles and constantly looking behind you in fear of being followed. It means staying alert. If this description of walking home doesn’t resonate with you, you’re likely not a girl living in England right now.

In wake of the recent happenings regarding Sarah Everard and sexual assault I asked my friends at school to raise their hands if they have ever been sexually assaulted or harassed. Every girl raised their hand. But what was worse than that, if anything can be, was the women who had to ask if being grabbed in the wrong places, begged for explicit photos or being catcalled on the street ‘counted’. As if some forms of sexual assault weren’t quite good enough. Women all over the country are made to question whether the hurt and embarrassment they have been caused is worth 'making a fuss about'.

Much of people questioning whether they deserve to feel upset about being assaulted is due to belittling and unfunny jokes that normalise inappropriate, sexual behaviour, so now women now just ignore it, seeing it as the usual. Sexual assault is not something to be joked about and it most definitely is not something to be taken lightly or dismissed. The dismissing of women's feelings regarding sexual assault is one of the main reasons why women feel unable to speak up or report what has happened to them.
​
Rape is a universal, awful issue, but what I'm focusing on in this article is the cases of sexual assaults or sexual harassment that are overlooked and disregarded. In 2018, 66% of girls aged 14-21 in England described receiving unwanted sexual harassment and attention in a public space, for example being catcalled. I've spoken to men who until recently didn't even realise that this was an issue, and some men who still see shouting at women in the street as a compliment. I can guarantee most, if not all women, do not see this as a compliment but instead as embarrassing and insulting.

Women do not owe anyone attention, they are not objects to be used for enjoyment and they most definitely do not need to 'smile for you'. So i ask you now, have you ever been touched inappropriately without your consent, sent or begged for photos or shouted at from across the street? If the answer is yes, you have been sexually assaulted or harassed. And if you're reading this thinking you have done some of these things to someone else, you are part of a very serious, overlooked problem.

Sexual assault is ANY physical, psychological or emotional violation in the form of a sexual act inflicted without consent.
Sexual harassment is ANY unwanted behaviour of a sexual nature which violates your dignity, makes you feel intimidated, degraded or humiliated and creates a hostile or offensive environment.
Of course it counts.