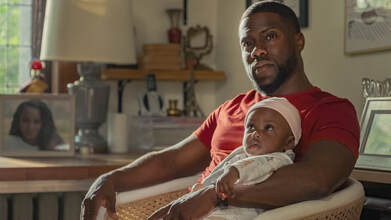 ​Fatherhood – the newest movie by Kevin Hart that can have you crying one minute, and in hysterics the next. It is the perfect family friendly movie for any occasion; it is new, poignant, and tackles many issues that make it an altogether brilliant watch.

Set in Boston , USA, we follow young man Matthew Logalin, who is preparing for a baby girl with his wife Liz. However, after Liz’s unexpected death, Matthew has to raise his daughter Maddy alone, as he balances work, home and grief.

In my opinion, I LOVED this film, as I felt it offered a fresh perspective on what is a “well used” storyline. Not only this, but I felt that it showcased a lot of modern day issues, such as black stereotypes and raising a child alone. What’s more, there was lots of comedic scenes, which contrasted well with the sad context to help keep the viewer interested.

​Kevin Hart’s performance was also refreshing – I felt it differed nicely to his other more comedic roles in iconic films such as Central Intelligence (2017) and Jumanji (2019). Instead, ‘FatherHood’ allowed the audience to see a brand new side to Hart, and showcased a more emotional and sentimental side to his already broad acting skills.

​One of my favourite scenes of the movie was when Matt makes the difficult decision to leave Maddy with her grandparents, in the hope of giving her a better life. I particularly loved this scene as it not only portrays the unbelievable strength of single parents, but it also shows Matt at his most vulnerable, which allows for a truly tear jerking moment.

What makes this film even more unique is that it is actually based on a true story. The movie is an adaptation of American writer Matt Logelin’s bestselling memoir: Two Kisses for Maddy, which also features the extreme lows and highs of a single dad navigating love, loss and parenthood.

But what do audiences think about this film? With 4.5 out of 5 stars on Google reviews, the public is certainly not shy about their love for the motion picture. One viewer described it as “absolute joy from start to finish” , with another stating that they “could relate to Kevin Hart’s character”.

​Overall, I 100% recommend this film for anyone who wants a heart-warming and comedic watch. This family friendly film is full to the brim with emotion, fun and laughter, and is sure to leave anyone who watches it with a big smile on their face.

Watch the Movie trailer below!