Laying the Foundation for Change 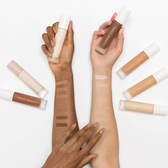 Following last autumn, when Rihanna’s makeup line Fenty Beauty hit the shelves, men and women all over the world have been led to the big question that has shadowed the makeup industry for decades - why is there such a lack in diversity regarding makeup shades and tones? In Rihanna’s range, there are currently 40 shades, which at first may not seem that many, but when compared to other brands with similar amounts, the diversity within the range of shades is extreme. Riri is the first woman laying the ​foundation for change when it comes to a new and diverse beauty and makeup industry. 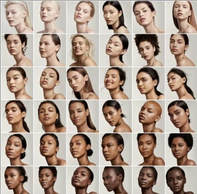 For a long time, the beauty industry has been known for neglecting women of colour and focusing on shades and tones for women of a lighter colour. Riri’s beauty line made us, the consumers, begin to really question and realise this big issue and how makeup brands need to deliver a change. Why have so many makeup companies not made the same notion? Why in 2018 are we still challenging diversity and black equality for something as simple as makeup?

Many companies would use the “excuse” that it costs too much to produce darker tones and create the better range for women of colour: however, the real story behind it and the science of making make-up proves otherwise. The owner and president of CSI, Al-Nisa Ward, in a video revealed that, in fact, all basic foundations have the same base and contain 4 main chemicals; titanium dioxide, iron oxide red, iron oxide yellow and iron oxide black. In order to make darker tones you just play around with the ratios of the pigments and chemicals - meaning it makes no difference to the cost or difficulty to produce: yet, we go to the drug store and we still see millions of ivories and only one chocolate. Just why is it missing?

This issue of colour has been around as long as make-up has existed. In the 1940s, makeup for black women was greatly lacking, however it was there. The main issue at the time was that beauty companies were still selling skin whitening products for women of colour. Thirty years later, in the late 1970s the campaign now known as “Black is Beautiful” began to emerge all over the world. The movement meant that more and more products were released for the black community, including drug store brands such as Maybelline and Rimmel; many black owned specific makeup companies began to emerge too, such as Fashion Fair and Ebony. High street brands were the first to majorly provide ranges, with L’Oréal being the leader despite having claims of whitewashing and culturally inappropriate campaigns. However, you can see where mainstream brands are lacking; for example, when looking in drug stores, anyone can notice the very clear trend; there are countless beige foundations to choose from but just a handful of darker tones, which often aren’t even dark enough for some consumers. It unfortunately is not just the foundations lacking but all products, as many are too white washed to create any pigment or colour on customers with darker toned skin.

Social media has, however, brought much attention to the issue of the white washing of makeup products. For instance, many YouTubers who review makeup lines often draw attention to the shades. One YouTuber known as Jeffree Star - who recently has greatly been in the public eye - found an issue when reviewing Beauty Blender’s recent release of foundations to work with the classic make-up sponge. When testing, he began to question why they had so many very light - nearly white tones - and only had a total of eight much darker shades. Despite Star’s very pale complexion, even he believed that there were far too many lighter and unnecessary toned foundations, in comparison tot the very few darker chocolate shades.

So why is this still happening? It is a question which really doesn’t have an answer. With black history month coming to a close at the end of October, the world is celebrating equality all over again - yet the makeup world isn’t totally equal.
By Bella Prichard