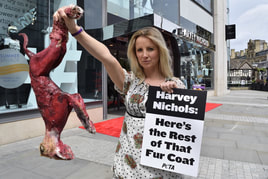 Fur is frequently used within the fashion industry and, in my opinion, it should be banned as animals are usually abused, tortured then killed in an inhumane way. Animals wanted for their fur are often electrocuted, an agonising slaughter method, to limit the amount of fur damaged. In China, people are not fined for abusing animals, leading to them being the world’s largest fur exporter, supplying millions of dollars’ worth of garments to the U.S. Also, in China, there’s a thriving industry for cat and dog fur. Cats and dogs are treated terribly, some are beaten, hung and sometime even skinned alive, all so that people can ‘improve’ their items of clothing. This kind of behaviour should not be tolerated, and no animal should not be killed just so that people can look ‘nice’. Their fur is also often mislabelled and exported from China to unsuspecting customers all around the world.
​
Around 85% of the fur industry’s skin come from animals who are held captive on fur factory farms and have been crammed into small, dirty and crowded wire cages. They then later get beaten, electrocuted or skinned alive. There are no federal laws to protect animals on fur farms. On mink farms alone, millions of faeces, from the minks, are produced annually in the U.S. A dangerous component of this is phosphorus which pollutes nearby rivers and streams, creating a harmful effect on the environment, and contaminates the water supplies. This means that not only are animals being abused and damaging the environment there is no easy way of defending them from these atrocities. 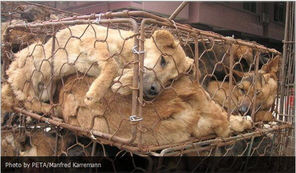 After an animal has been slaughtered, his or her skin is treated with toxic chemicals to prevent it from rotting and decomposing in the consumer’s wardrobe. According to The World Bank, the hazardous process of fur dressing is so problematic that the fur industry is now ranked as one the world’s five worst industries for toxic metal pollution. So why is fur still being used in fashion?
Approximately, one billion rabbits are killed each year so that their fur can be used in clothing or trim on craft items. Although most animals killed for their fur are raised on fur farms, millions of racoons, coyotes, bobcats, beavers, and other wild fur-bearing animals are killed every year by traps. The steel-jaw trap, which the American Veterinary Medical Association calls “inhumane”, is the most widely used trap. It has been banned by the European Union and an increasing number of U.S. states. 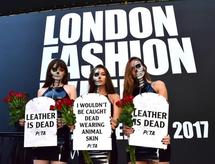 Recently, London Fashion Week vowed to become fur free resulting in it being the first out of the many fashion weeks to change, for the better. The British Fashion Council (BFC) made this announcement after a rising number of anti-fur protestors at London fashion week from 25, in 2016, to more than 250, in 2017. The news followed after Burberry, pledged to stop using real fur in their products. Gucci is another high fashion brand which vowed to go fur-free from 2018, and the list is growing. Wendy Higgins, Director of Communications for Humane Society International, says this: "Fur cruelty is no longer welcome on the catwalk at London Fashion Week, and that is a powerful and exhilarating victory for animals that we hope others will follow." 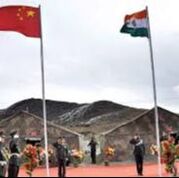