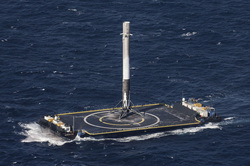 You might not be aware, but April 12th 2016 was a significant milestone in the history of spaceflight. SpaceX, a commercial aerospace endeavour, launched their Falcon 9 spacecraft to carry a cargo payload to the International Space Station. But that isn’t the important part. The part that made history was what happened to the spacecraft’s booster after it detached from the spacecraft. Rather than falling back to earth and either ‘splashing down’ into the sea, or burning up due to friction (as is typical) it successfully landed again; on an automated barge in the middle of the ocean. Until recently, landing (in a controlled manner) a spacecraft booster had never been done before, much less on a robotic boat! The intent of this is that the booster can be reused, thus making repeated spaceflight significantly cheaper.

This is the latest in a long line of firsts by SpaceX (although it didn’t come without cost, a large number of boosters have made less than controlled landings) Because they are a private company, with a large pool of funding behind them, they are able to innovate much faster than a governmental science agency like the well-known American NASA (National Space and Aeronautics Agency) or the less publicised ESA (European Space Agency). These organisations are limited by budget restrictions and bureaucracy, which companies funded by individuals are not immune to but are less affected by.

The figure behind SpaceX is Elon Musk, a Canadian American businessman and inventor. Another company of his is Tesla Motors, a highly successful automotive company that manufactures luxury electric cars, credited for producing the first fully electric sports car. Musk has also publicised plans for a high speed transport system dubbed Hyperloop, and SolarCity, a project based around combining roads with photoelectric cells. If that wasn’t enough, he was also the co-founder of PayPal, and is creating new and unique concepts to this day. He envisions a world where spaceflight into orbit and beyond is as easy as taking the train, and our cities and cars are sustainable and efficient. Moreover, he is not content to just envision this world, but actively works to build this better future.

This is just one example of a private organisation or independent figure that is driving change and building a better and more advanced future. Investment is being poured into everything from self-driving cars, to laser propelled micro-satellites to the colonisation of other worlds. New (or newly viable) technologies are emerging, such as 3D printing (currently most useful for rapid physical prototype creation) and Virtual and Augmented reality displays, with a myriad of applications. The important players in the science and technology world are not governments, but individuals. You could be one of our generation's future great innovators. The future is what you and I make of it.