Does Feminism exist in the Media?
Amber Mehmet 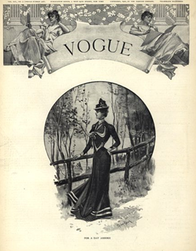 Feminism. ‘Feminism’ encompasses the ideas of female empowerment and equality between both genders, the significance of both of which have become increasingly voiced in the last decade. However, despite this push for gender equality, it would seem that in the media, the representations of women is not moving at the same pace as societal changes.

The popular iconic fashion magazine Vogue holds the title of the best selling fashion magazine in the world. With a large female audience, it holds a prestigious reputation. Yet, looking back to the earliest editions of Vogue in the 1800s to present day, the way women are represented on the front cover (with a focus on body and appearance) hasn’t significantly changed. Even back in the 1800s females were represented to have a tiny waist and be slim, in all likelyhood to be considered ‘attractive’ by society. 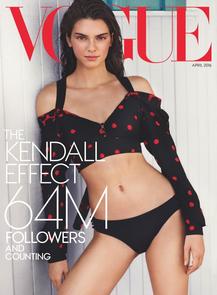 The modern day Vogue edition bellow features the reality TV star Kendall Jenner. She is making direct mode of address with the camera while leaning her body forwards and wearing minimal clothing revealing her slim figure.

All of the women represented in Vogue are glamorous and represent a glamorous lifestyle Vogue wants their audience to buy into. This is reminiscent of media theorist Geer’s concept of ‘Glamourous Ideal’: women represented in the media, Geer explains, are made to look attractive and glamorous; but their media representations focus on appearance only and ignore other factors, such as the importance of personality and intelligence. The media therefore presents a hyper-realistic, unfair and inaccurate perception of women, as its focus on flawless appearance leads them to falsely construct these representations of women, by, for instance, editing pictures on Photoshop as well as airbrushing the models to achieve an immaculate look.
This gives teenage boys and girls an unrealistic perception of attractiveness. Girls compare themselves to the models and boys compare other girls to the models in the hope of finding what is considered ‘attractive’ by society.  The author of Women’s feminism and media, Sue Thornham, states ‘inaccurate stereotypes damage a women’s self-perception and limits their social roles as they damage how women perceive themselves.’  Feminist theorist Laura Mulvey put forward the notion of ‘Male Gaze’ in advertising, and suggests that advertisements in the media are constructed in order to suit a heterosexual man’s ideal female representation. Theorist Fowles elaborated on this, explaining that advertising enables men to gaze and women to be gazed at. This suggests that in advertising women are objectified as sexual objects for men to gain pleasure from. Despite how successful Vogue magazine is, its representations connote sexual promiscuity, and it is evident – and unfortunate – that their representations of women haven’t moved on alongside societal changes.