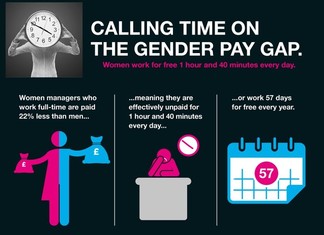 Men currently earn, according to The Independent, 23 per cent more than women per annum in the UK and the US, despite the fact that most people believe that the gender equality struggle is over. From this statistic, one thing is clear: the gender pay gap deserves far more attention than it receives.

Throughout history, women have been treated as the lesser sex and it has only been in the last hundred years that our rights, both politically and socially, have expanded. The 1918 Representation of the People Act gave women over the age of 30, albeit with rigid conditions, the right to vote; in 1928, all women over the age of 21 received their voting rights as part of the Equal Franchise Act. However, giving women the vote was only the beginning of an uphill battle to guarantee gender equality.

The Equality Act of 2010 dedicates an entire clause to the gender pay gap, stating that most private sector employers must publish whether there are “differences in the pay of male and female employees”. Nevertheless, as of 18th November 2015 the Office for National Statistics (ONS) calculates that the gap is currently at 19.2 per cent; despite regulation designed to deter employers from paying male employees more than female employees, the discrimination persists.

The European country with the largest gender pay gap, according to the OECD, is Estonia with a gap of 31.5 per cent, whereas the state with the smallest percentage gap is Belgium at just 6.41 per cent. To analyse the reason why men are consistently paid more than women, the equality legislation between Estonia and Belgium must be compared.
The Estonian Gender Equality Act, published in June 2010, sets out that a commissioner will preside over all reports of gender inequality but aside from this there is no legal requirement  for men and women in the same job to be paid equally. This creates a legal loophole which highlights why the percentage gap between the earnings of men and women is at such a staggering level. In stark comparison, the Belgian government has implemented a vast array of gender pay gap related legislation with the aim of eliminating the gap entirely. A 2012 Belgian equality law states that “the gender pay gap should be discussed on all levels of collective labour negotiation” and “a mediator for claims of unequal pay can be appointed in companies”. Moreover, it is apparent that specific legislation is a key feature required to close the gender pay gap.

In light of this comparison, it can be deduced that the UK’s Equality Act does not go far enough with regards to closing the gap. Unless legislation is implemented which explicitly requires companies to pay men and women in the same job the same wage, the problem will persist indefinitely.

President Obama recently outlined his plans to tackle the gender pay gap. If passed, the executive order would require all companies who employ more than 100 workers to publish annual reports into “how much they pay workers based on gender”. Mr Obama expressed his strong desire to close the gap because “the notion that we would somehow be keeping my daughters … any of your daughters out of opportunity, not allowing them to thrive in any field, not allowing them to fully participate in every human endeavour, that’s counterproductive.”

This quote perfectly sums up the reason why it is of the utmost importance that governments implement legislation to tackle the gender pay gap. Meritocratic wage allocation should be a fundamental feature of the workplace. However, through paying a woman less than a man for performing the same task, the system of meritocracy is undermined and the incentive for women to climb the managerial ladder is diminished.

David Cameron also recently announced plans to combat the gender pay gap and expressed his view that “you can’t have true opportunity without equality. There is no place for a pay gap in today’s society and we are delivering on our promises to address it.” Nonetheless, a scheme to “end the gender pay gap in a generation” does not tackle the problem for the women who are currently facing wage discrimination.

The future for women in the workplace is unclear. It is estimated that at the current rate of progress, the gender pay gap will take 60 years to close. Therefore, an entire generation of working women will miss out on equal pay, the opportunity to succeed in their chosen field, and a meritocratic wage system. Women should not have to wait 60 years to receive wage equality; in fact, women should not have to wait at all.

We are the next generation of women who will face wage discrimination, we cannot wait and we are the only people who can resolve this issue.