Gender pronouns. Are they out of date in our modern society?
Ellie Trinnaman 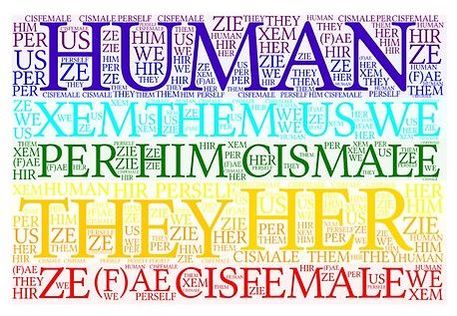 Despite the impressive growth in equality since the early 60s, it still yet remains within my nature to sit uncomfortably with the fact that is no great emphasise on the use of the ‘third pronoun’ which is associated with gender. A gender neutral or gender inclusive pronoun is a pronoun which does not specify a gender with the individual in which is being discussed. Some languages, such as English, do not have a gender neutral pronoun available. This has been criticised, since in many instances, writers, speakers, etc use “he/his” when referring to a generic individual in the third person. This, therefore, does not leave room for other gender identities, sparking a sense of frustration to other LGBT+ communities – understandably.

Non binary pronouns came around within the Old English language. The English language once had grammatical gender for non ‘gender specified’ objects but it started to disappear in the 700s – perhaps due to the lack of drive and desire to keep it within practise. By the 14th century, the English language involved a gender-neutral pronoun, a, which was successfully welcomed to the extent of still being used today within English dialect. Singular ‘they’ had been the standard gender-neutral pronoun in English for hundreds of years, however in 1745, it was said that is was no longer acceptable. So instead ‘he’ was used as a gender neutral pronoun. This, of course, caused dispute as it questioned social hierarchy – why could ‘she’ not be used to generalise? Why does ‘he’ come before ‘she’? That is a whole other argument in itself.

Whilst there is plenty of evidence to suggest that people in the past, as well as presently, are making a conscious effort to introduce and promote these non-binary pronouns, it implies that the issue lies within putting it into use.  The immediate contradictory statement which is often raised at this point within the argument is that your gender identity and how you identify as an individual, differs greatly from a person’s sex. Whilst gender is something you can chose, sex is biologically determined. Pronouns are used and are ‘labels’ for a person’s sex, not what they identify by: it represents the whole of a person’s body, it exists independent of our mind. Therefore, people argue that it is unnecessary to bring in another pronoun when it does not fit, nor make any difference, as pronouns simply do not address gender, but sex.

However, in saying that, it is obvious that within the 21st century in which we live in, where equality is reinforced everywhere we look (and rightly so), it is almost obvious that people should be able to specify which gender pronoun they prefer as it is personal to them and should not be assumed – just like an individual’s gender isn’t. Because if a person’s sex isn’t what they sit comfortable with, who is to say that they can’t make themselves feel better about by changing the pronoun in which people address them with? If you don’t like the book you are reading, you change it. If you don’t like what outfit you are wearing, you change it. If you don’t like the pronoun which is making reference to you, you change it.