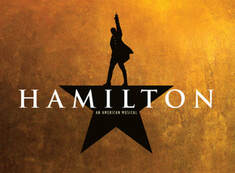 A simple answer to the question is Hamilton really as good as all the admiration it has received would be, yes!

Hamilton is an American musical based during the American revolution that centres around the life of Alexander Hamilton, an American statesman and one of the Founding Fathers of the United States who was an influential interpreter and promoter of the U.S. Constitution, as well as the founder of the nation's financial system, the Federalist Party, the United States Coast Guard, and the New York Post newspaper.

After discovering the song ‘The Schuyler Sisters’ in my recommendations on Spotify I decided to give a few more songs from the album a try and before I knew I had listened to the entire soundtrack twice over. I received the tickets as a Christmas present and on Wednesday 20th February travelled up the West End to see the show at the Victoria Palace. Whilst I had high expectations going into the show, having known several people who had been previously been and thoroughly enjoyed it, Hamilton exceeded all expectations.

The minimalistic set fitted perfectly with the era the show was set in, it never changed, despite there being a turntable in the centre of the stage that made a world of difference to all the dances, but I was able to focus my attention on the acting, singing and dancing itself, but the set was enough to bring a realistic feeling to the show. The acting was flawless from the majority of characters, even though the play was mainly singing and rap despite a brief scene of talking in the middle of the play. The dancing was also exceptional and fitted faultlessly with the singing.  The West End show was true to that of the original, using actors of colour to show that America wasn’t just founded by white men. Having never been a lover of rap before the show and soundtrack most certainly opened my eyes to new genres of music.

Although the tickets prices are on the more indulgent end, every penny paid is definitely worth the money.