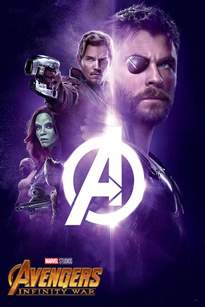 All Marvel fans were eagerly awaiting Avengers: Infinity War, the latest instalment of the ever-popular series of films set in the Marvel cinematic universe, and on the whole, the movie did not disappoint.  The Avengers team up with various other characters from across the galaxy to defeat the evil Thanos who aims to collect all the infinity stones to power his infinity gauntlet, an item of great magical power which has the capability of destroying the universe.
​
This film has amazing special effects and a star-studded cast, featuring popular actors Robert Downey Jr, Chris Pratt, Chris Evans, Scarlet Johansson, Benedict Cumberbatch and many others. The shocking twist took many of the audience unawares, as it went to a relatively dark place for a superhero film, somewhere that the regular cinemagoer who expects just a CGI superhero fight probably won’t enjoy. That doesn’t detract from the quality of the film, however, as it seems to be an appropriate ending that makes Infinity War different from so many of the generic superhero movies. After the film, the audience remains in a stunned silence, almost unheard of after a superhero film, and then they slowly begin to talk amongst themselves, asking as though killing off half the main cast was Marvel’s idea of a prank, whether the deaths of characters they have come to love after spending hours with them as they overcome difficulties and have emotional character arcs were real.  They look around, wondering if the film is really over, if there’s an extra hour of film showing how they all come back and defeat Thanos. But there isn’t.

Despite the immense emotional impact of this film, it must be mentioned that despite being quite a long film (two hours and forty minutes precisely) it was so focused on plot that there was little room for any characterisation whatsoever, and with such a big main cast they often had little time to interact with each other. It’s in the little things, like how when Captain America reunites with Bucky Barnes, where despite the fact that they hadn’t seen each other for years when Bucky went under cryostasis, they barely acknowledge each other and then the scene continues, propelled by the complex plot. Avengers: Infinity War relied heavily on the fact that their audience will have likely seen all the previous films in the series, assuming that we already know the characters and therefore need no further characterisation. Out of context of the further Marvel cinematic universe it seems poorly made, yet backed up by the previous films it can easily make sense. Sure, they missed out on some potentially amazing conversations, but there really isn’t any room for them in a film packed with such amazing action scenes.
​
Overall, I would highly rate this film, and would definitely recommend it, although be warned: if you haven’t seen the previous Marvel films you’ll be left in a state of confusion rather than a state of tears.
​