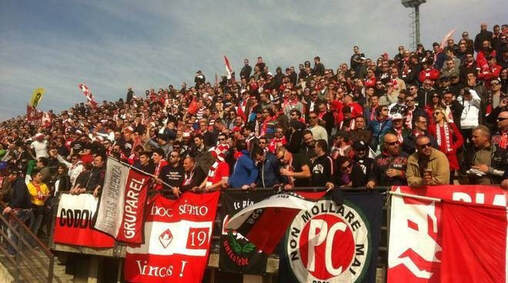 “Ti porto nel cuore, nel bianco e nel rosso, l’unico amore, non posso restare lontano da te” (I keep you in my heart, in the white and the red, my only love; I cannot stay away from you)
I’ve always found the fans the most interesting part of football, especially growing up in a town just outside of Milan watching my local team Piacenza or “I Lupi” (the wolves), who currently play in the Serie C, the third division down the football league. Because of this, I understand that for some, football is more than just a game; it is a way of life, an obsession, a passion like no other. The “Ultras”, as the name suggests are Ultra supporters, they are die hard fans and followers of the club. For more than 50 years, the ultras have turned the curve, (the “curved” ends behind the goal) of large and small stadiums (like the one at Piacenza) into areas with intense passion, political slogans and violence in some cases.

​The first ultra-groups formed in the late 1960s, when supporters from AC Milan, Inter, Sampdoria, Torino and Verona formed loud and enthusiastic groups. The original groups were often from the far right, united by passion for their club, but also had radical nationalistic beliefs. By the mid-1970s, every major club in Italy had its own ultra-group, and today there are dozens

The centre of the curva is where every group wants to be, it is as territorial as a drug dealer’s area, bribes, fights and stabbings occur as people contest to get to the core.

Many ultras say they care nothing about football: it is all about territorial defence, about the colours, the atmosphere, the lust and the “mentality”. Ask an ultra-next to you on the stands who scored a goal and they will laugh at such naivety: either they were not watching or players change teams so often that they do not know or care about the name.