Is The Cancel Culture Epidemic Really a Problem?

​I want to make a few things clear, I will not be talking about random people being dogpiled for saying bad things that no-one would care about usually. I am referring to celebrities, politicians, comedians and/or generally popular people having their career ruined for saying or doing bad things. Luckily for us, that has never actually happened and no-one has been truly cancelled.

James Gunn is probably the most widely known example of a cancelled celebrity, as in July 2018 tweets resurfaced from 2008-2012 about him making jokes about rape, child abuse and paedophilia. He was subsequently fired from the Guardians of the Galaxy vol.3 movie due to public backlash because he did a certifiably bad thing, but it’s not like it affected his career. He was back on Guardians of the Galaxy vol.3 within 7 months and is directing the Suicide Squad sequel.

Other examples included:  -Mel Gibson not only blamed the victims of sexual assault but also said the n-word in the same quote in 2010, has won 4 awards and been nominated for many more. -Louis C.K. who is quite literally a sex offender, is still a very popular comedian.  -Remember a year or two ago when Brett Kavanaugh was accused of sexual assault by multiple women? He managed to become a member of the supreme court in the USA, a life-time appointment.

Another example that I want to talk a bit more about is J.K Rowling and I will be upfront here, I hate her. She has had many bad opinions about the transgender community for example when in June of this year she said: “When you throw open the doors of bathrooms and changing rooms to any man who believes or feels he’s a woman … then you open the door to any and all men who wish to come inside”. How about her new book where a man dresses up as a woman and murders them which is openly transphobic and harmful. Here we have a person who has undeniably bad opinions who has the highest-selling book series of all time, 5th most sold book of all time and the book I just mentioned reached no.1 in the UK book charts less than a month ago. This is unacceptable and no amount of cancelling has ever affected her and probably never will.


None of the people I've talked about has faced any real consequences, yet cry out about being ‘cancelled’. What is being called ‘cancel culture’ really is just the wealthiest people in our society throwing a tantrum for being held slightly accountable for doing bad things, but they don’t face any real consequences. It’s these people trying to push the narrative so they can keep saying their bad opinions. So let’s cancel the idea of cancel culture, and hold people accountable. 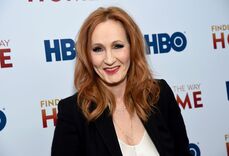