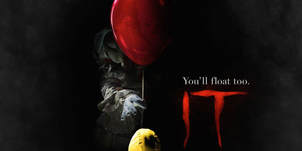 Directed by Andrés Muschietti, It is a thrilling adaptation of the 1986 novel by Stephen King.  It portrays a group of children who must face their darkest fears in the form of Pennywise (Bill Skarsgård), an evil creature that appears either as a terrifying clown or some other horrifying image. Together, they form the losers club, with the aim of defeating Pennywise and saving the town of Derry. This is a truly effective horror film, with an eerie tone that is briefly intersected throughout with lighter scenes which show more of a coming of age story. This means that unlike so many other horror films, the spectator really connects with the characters and becomes emotionally invested in the story, making it more immersive.

This is the first of two films which will encompass the original book, the first of which portrays the protagonists as children. The second is due to arrive in cinemas in 2019. Stephen King, the author of the book it is based on, is known for writing large books with lots of detail, so it makes sense to spread it out over two films.

The horror aspect of the film is performed well, as it doesn’t rely on only jump scares to frighten the audience; it also creates a continuous dark undertone, as even in the lighter, more upbeat scenes you are still reminded of the danger that the characters could face at any moment. The CGI effects aren’t over the top which is really effective as it keeps the effects mostly realistic and it is a good contrast to so many films that rely too much on special effects to carry the movie.

There are so many great scenes that it’s difficult to pick a favourite, but all of the scenes with Pennywise are great thanks to a combination of great acting by Bill Skarsgård  combined with the atmospheric music of Benjamin Wallfisch,  which really sets the tone. This film is brilliantly thought out, as well as being quite a faithful adaptation to the book. You may have heard that it pales in comparison to the 1990 TV adaptation, but as someone who has seen both, as well as read the book, this is certainly not a film to miss out on!

While I strongly recommend this film, I must advise that it isn’t suitable for younger viewers, although when you are old enough, watch this immediately as it is well worth the wait!