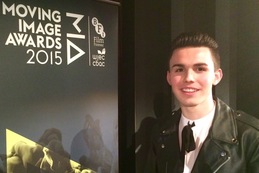 The glittering event was hosted by presenter and film-maker, Iyare Igiehon, and included a talk and Q&A with British director, Corin Hardy, and a presentation from film producer, Lizzie Pickering.

With two special mentions and one nomination, Herts and Essex was the best represented school at the Moving Image Awards, which had received over 700 entries from schools around the country. Jeremy Points, Head of Creative and Media Arts, WJEC stated "we were really impressed with the quality of work entered from the school and look forward to seeing next year's entries."

In the hard fought category of Best Music Video Joe was pipped to the award by Matthew Sedgley, representing King Edward VI College, Nuneaton, Warwickshire, who then went on to claim the top prize of Overall Winner 2015.

Although disappointed to have narrowly missed the top spot Joe still felt proud of how far he had come "I'm so happy to have been nominated. Being selected as one of the top three feels like such an amazing achievement in itself even though I didn't win in the end"

Christine Bell, Principle Examiner, AS/A Level Media Studies, had some very positive feedback for the three shortlisted candidates stating that "it was difficult to distinguish their work from that of professionals." She gave Joe some specific praise, describing his video as being "refreshing", having "real creative flair" and utilising "innovative iconography".

After the ceremony, she was full of praise for the "very impressive" level of editing work that had gone into Joe’s production and was delighted to hear that he was continuing his studies in film production.​

Joe now awaits offers from a number of top Universities as he moves towards the next stage in his film making journey.